For his 12-week birthday Sage got to go to the monthly meeting of my Dog Training Club so he could meet everyone. The turnout was especially high and the entire room was filled! He was a little overwhelmed, but spent the entire 1.5 hours on my lap being the Best Puppy!
For awhile he chewed on his bone, then listened to the discussion, finally settling into a serious nap. During the course of the evening he made a few of his squeaky comments, but never barked or was at all disruptive. Everyone exclaimed that he was a really good puppy!  Well, yeah....!
He was a little angel and when the meeting ended he allowed everyone to come and say hello and see just how handsome he is.  At one point I handed him to the woman sitting next to me who'd been dying to hold him all evening. He was a little frantic when first transferred, but settled right down when he realized I wasn't leaving.
As expected, none of the Club members had ever seen a Cardi puppy, let alone one as unusual as this. They were mystified as to what he was when I first showed up.  As the only Cardigan in the Club, Denali gets a lot of attention and quizzical looks. Being black and white they all thought she was a Border Collie mix at first. But this one really stumped them! 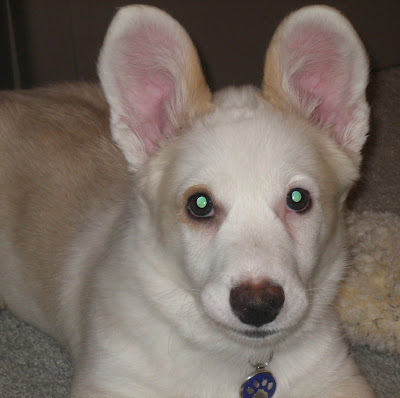 Looking more like a Big Dog every day. He's now up to about 12 pounds. 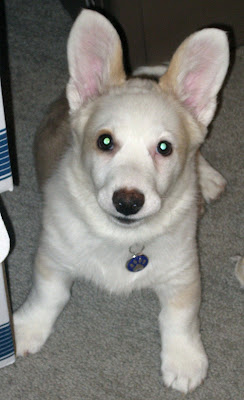 Caught...again...chewing on my storage boxes! Thank you Bitter Apple! 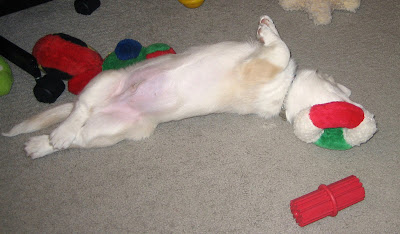 Having his very own Cardi Party! 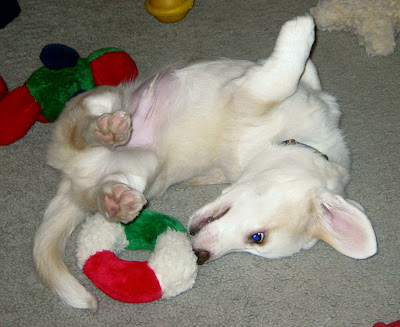 Sage entertains himself with toys really well. He especially likes this new one that Denali got for Christmas!
Posted by Elbeepem at 8:04 PM