The Day Bart Adopted Me

In September 1997 I was ready to adopt my first Rescue Dog. Indeed, this would be the first dog ever for my husband, Moe, and me.

I’d done my homework, researching breeds carefully, learning about the many responsibilities of dog ownership. I’d spent several months looking and contacted a number of likely sources. I knew that I wanted to adopt a rescue dog, versus purchasing one from a breeder.

But there were some hiccups: The dog I wanted, a purebred Cardigan Welsh Corgi (CWC) female, age 1-3 years, preferably black and white, was exceedingly rare as a rescue dog. In fact, at that time the Cardigan Welsh Corgi was still quite rare. There were few breeders, and fewer still in my geographic area. There were less than 10,000 of these dogs in the U.S.

In addition, I would later learn that there are many more corgis for rescue in the “middle” states, due to the preponderance of puppy mills. Here in the San Francisco Bay area in California, corgis in rescue were very rare. In fact, that is still true, relative to many other parts of the U.S. In short, the purebred Cardigan is almost never to be found in my area as an available rescue dog.

As part of my search I’d subscribed to the Corgi-L Listserver and posted my intent to adopt a corgi. After nearly four months of looking without a single lead, someone on that List posted that she’d seen a male corgi-mix recently at a dog park in San Francisco. It turned out the dog was a foster dog available for adoption. She didn’t know what the other breed(s) in the mix might be and there was no picture.

It had never entered my head to look for a corgi mix, and I didn’t think I wanted a male. (I thought that the female would be less dominant – shows what I knew.) But, given that it was the only lead I’d come across, I had nothing to lose by checking this guy out.

On Thursday evening I made the trip. Arriving at the small house in the Lower Sunset District, I rang the bell. The foster person, Georgette, brought Bart out to the front yard. I took one look at him and the little voice in my head said, “Oh, he’s not what I’m looking for at all.”

Bart was primarily black, with white markings on his chest and feet, and copper points. Later I would learn that his coloration was a classic pattern associated with the Australian Shepherd. Bart was a Corgi/Aussie mix. But I didn’t know that then, and neither did the private rescue organization that had pulled him from the San Francisco shelter.

In short, I was looking for a two-year-old female, purebred Cardigan Welsh Corgi. Bart was a five-year-old male corgi mix. Not a fit. But I figured I should at least be polite so I asked the foster person, “Has he had any obedience training?” She replied that he’d had no training when she first got him, but she’d been working with him. “He knows to come to his name now and how to sit.”

To test her statement, I looked over at Bart, who was sniffing around the front lawn, completely oblivious to my presence. I called his name, “Bart.” Immediately he looked up, spotted me, and came trotting over. Upon reaching me he stopped, directly in front of me, sat down right at my feet, facing me. In an instant he threw his head back, and burst into the biggest grin imaginable. 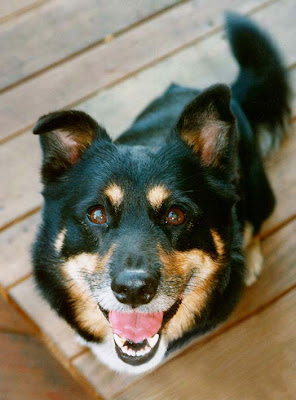 This was the first picture of Bart I ever took. This is exactly what he did the first time we met. It is the Bart Smile!
In that instant all of my previous “requirements” vanished. There was no one else in my world except this happy, affectionate animal. In that moment I knew that finding a two-year old, purebred, female Cardi wasn’t important. All that mattered was this wonderful dog that really needed a good home.

As I bent to pet him, Bart rolled onto his back and presented his belly. Belly rubs were a big favorite and he had to be sure I knew how to do it right. Clearly I passed the test. Bart had picked me.

But that’s not the end of the story: Being the conscientious sort that I am, I thought that I needed to “think about it” before committing to take Bart. As well, my husband hadn’t seen him. So I went home - without my dog.

For the next two days all we did was talk about Bart. I was so excited, but unsure if he was really “the one.” Finally, on Saturday evening Moe turned to me and said, “I don’t know what you’re waiting for. You know Bart is Your Dog. Just go get him!” And on Sunday we did. That was September 7, 1997.

For the next eleven years Bart was always by my side; a true Velcro dog to the end. From that first moment he had picked me. I was his Person, he was My Dog. There will never be another who will touch my heart so deeply. He was incredibly smart, sweet, and dedicated. He taught me more than I ever thought possible.

On December 3, 2008, at the age of sixteen, Bart’s body could no longer offer him the quality of life he deserved. Tearfully we let him go, but I know he will remain with me forever in spirit. As I told him many times, he’s the Most Wonderful Dog in the World. I will love him forever.

That picture is EXACTLY how I will remember Bart always :)
Tears flow again... partly for the loss of your buddy.... and partly for the beauty that your story portrays.... :) *hug*

We extend our deepest sympathies to you on the loss of Bart. We wish we could stop in and pawsonally give our comfurts to you.

With sincere regard and gratitude for all you do on behalf of corgis, wet nose kisses from Tilin Corgi & Jack Corgi & Ani Siamese

All the best from dog-ma too.