Nolan - The Last to Venture Out

Our shy boy, Nolan, made his debut in the Outside World today. As expected, he was not as outgoing as his three comrades. He was more comfortable keeping to himself and not interested in socializing with his foster mom's friends. (Thanks to Katie and Pat for their kindness in working with Nolan!) Much of the time he wanted to hide behind his foster mom, with whom he has developed a strong bond. He is the "velcro" in the group.
Actually this type of behavior and level of confidence is what we'd anticipated from all four, given their lack of exposure to the world. In many ways Nolan is more willing and curious than we'd expected these dogs to be, but he requires more reassurance than the others. He was interested in examining the landscape as he walked around the block, but wasn't interested in people. 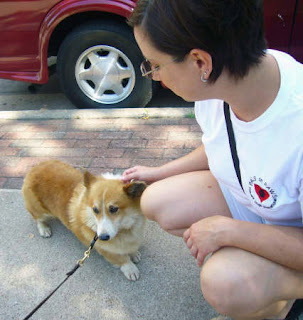 Nolan was less-than-thrilled at the idea of approaching a stranger, but wasn't nearly as fearful as many puppy mill dogs can be at this stage. 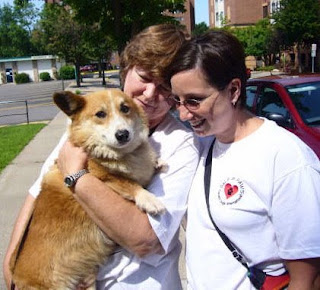 He did submit to being held, but wasn't crazy about the idea.
But when Nolan got back to his foster home, he was introduced to K.D.'s little rescue girl, Ghillie.  He was MUCH more interested in her! 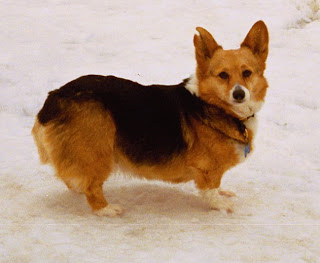 Miss Ghillie... Isn't she a looker?
Here's what K.D. had to say about Nolan's introduction to Ghillie:
"Ghillie stuck her nose thru the fence to sniff him. She sat down next to the fence and gave him her entire side so he could sniff her and she did not look into his eyes but rather gave the - approachable side - it is okay to sniff me thing.  Nolan wagged, Ghillie wagged and they exchanged some communications." *
*Interesting fact: Ghillie was also a puppy mill rescue. She was far less confident and well-socialized than Nolan is today when K.D. adopted her. She has blossomed with the patience and excellent care she's been given. Today this lovely girl is a Registered Therapy Dog and has just achieved her Canine Good Citizen certification! She's a great role model and it seems that Nolan has noticed!
But his FAVORITE girl still seems to be K.D. for right now. She said:
"Nolan now jumps up on me to be picked up or he lays down and rolls on his back with his feet in the air and looks at me.  RUB my belly!! So I held him for a good 20 minutes.  He never tried to get down."
Posted by Elbeepem at 9:27 PM

I am interested in adopting Nolan. Can you please give me information on how to proceed?