Wilson proved a bit more hesitant when it came to meeting new people and new dog pals. At first he didn't want to walk on a leash, but with a bit of encouragement he managed. All the new sounds in the Outside World were overwhelming.

Strangers were initially too intimidating, but after ten minutes or so that Corgi Curiousity just got the better of him and he chose to approach cautiously. He seemed to especially like Amy and the feeling was mutual, as you'll see from the photos.

When it came to meeting new dogs, Wilson walked right up to Eko (Anatolian Shepherd) and they were fine together.

Though he wasn't quite as gregarious as Charlie and Kelly, Wilson's social confidence was still much better than anticipated for a first outing. This is a really sweet little guy and his Foster Mom reports that his confidence is growing noticeably each day. Wilson learns very quickly and we're starting to see that he's got quite the sense of humor! Wilson, you're a Winner! 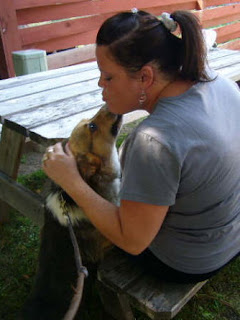 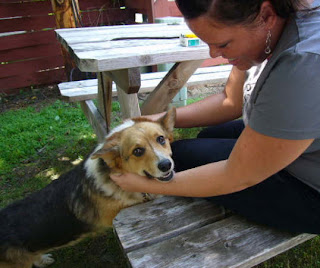 For those who say dogs don't smile...think again! 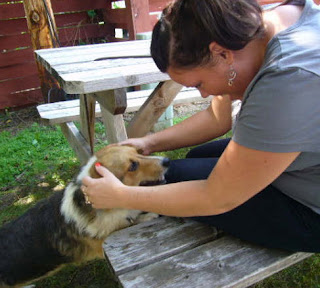 Not only is Amy friendly, but she has the Ear Scratch down to a science. Ahhhh! 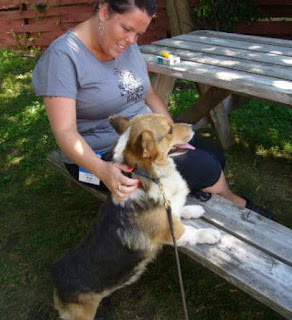 And, as an added bonus, a picnic table! Any self-respecting Corgi is always alert for a Food Opportunity! I'll just take a little look-see up here! 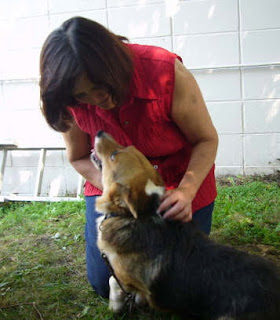 These new folks are really nice, but you're still my favorite Foster Mom! 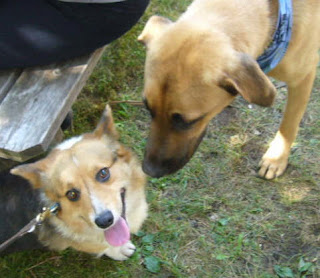 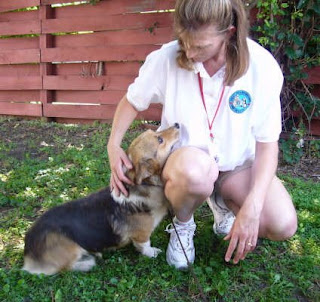 Hi Teresa! So nice of you to come down to my level!
It's so much nicer when people don't tower over me.
Charlie spoke so highly of you! Thanks for making me feel at home here.
Posted by Elbeepem at 6:25 PM

Found you through Corgi-L. Bless your heart that these sweet puppies have found such good foster care. I look forward to keeping up with your adventures and their progress!!

I tried to email you privately using info@forpaws.org, but my email is rejected---says I am not authenticated. I noticed you hadn't deposited my check and was trying to see if there were a problem.