Yesterday morning I was out in the yard. Elbee was with me. It was about to turn into an 85-degree day, and was already warming up at 8:30AM. Suddenly I looked around and Elbee had disappeared.
When that happens, I know to look for her around a corner where we almost never go. There is a pile of dry leaves from a big oak tree there and there's always Good Stuff for the Princess who will eat absolutely anything disgusting that she can find!
We store old flower pots in that area and when I went to get Elbee, I was amazed to see this big lizard in one of the pots. It was probably the largest lizard I've seen in a city environment, about 9" long, with a body about 1" in diameter. Clearly this fellow knew where the best hunting was to be found. He appeared quite well-fed. Based on the appetite, I assume it was a "he." But then again, you don't get to be this big by being a stupid lizard, so perhaps it was a "she" after all?
Anyhow, it was quite pretty, as lizards go - really gorgeous colors. It was sitting in this pot, with some dry leaves with a number of little gnats buzzing around in the morning sun. Yum, delicious breakfast for any lizard. 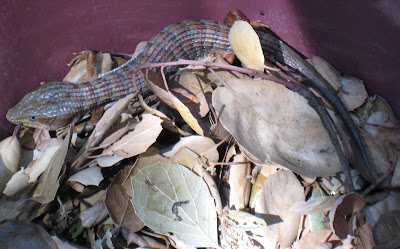 So I went inside and didn't think too much more about it.  Awhile later I checked and it was still there. In the evening it was still there. Only then did it dawn on me that this particular pot had a slick glaze on it and the poor lizard was probably unable to climb out of the pot! They're good little climbers, but they need a surface with some texture to get a foothold.
Sure enough, when I went to look again, it was on hind legs, madly scratching at the side of the pot in an attempt to escape. I gently tipped the pot on its side and the lizard slide down and froze. It was essentially standing at ground level now and I thought it would skitter away immediately, but it didn't.
It had been a really hot day and that corner gets very warm so I thought it might be dehydrated. I got a little saucer of water and set it just outside the edge of the pot. The lizard was still too frightened to move. I took some water on my finger and dripped a few drops right in front the the lizard's nose. To my surprise, it didn't attempt to run, though it easily could have. It just kept watching me.  My finger was 1/16" of an inch away from touching its nose! As I moved my finger away, its tongue flicked in and out a few times - it was drinking the water droplet I'd given it! Very cool!
I stood up and watched it for a few moments longer. And it just kept peering back. I went away so it would feel comfortable enough to leave the pot and find a place to spend the night. Sure enough, ten minutes later, it had gone.
This morning I emptied the leaves out of the pot and found that another, much smaller lizard, had not been so fortunate as to be rescued by a curious little dog rooting around in that corner! Sigh...too bad.  So from now on all flower pots stay upside down when not in use.
Oh yea...only after I looked at the pictures I'd taken when I first discovered it, did I realize that the lizard had been eating something at the time...look closely! 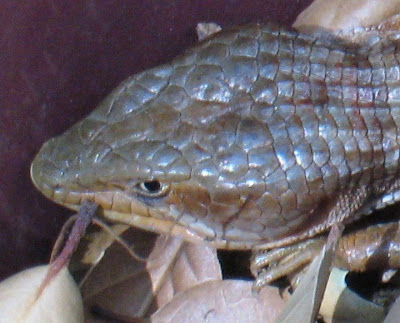 Thanks Elbee! This lizard definitely owes you one!
Posted by Elbeepem at 10:21 PM

what a cool looking lizard!!!!!! I'm used to seeing the desert guys out here doing their "lizard pushups" on the block walls, but I dont' recall seeing lizards in the bay area - and one so PRETTY! :) Cool story

That's lovely to hear about. You could register your backyard as a wildlife habitat!

Ha...with three dogs, one an active puppy, and another who "thinks" she's a puppy, I could register my house as a wildlife habitat!

Seriously, we were VERY lucky to get this particular lot that is adjacent to the creek and has a huge 200+ year old oak tree that we get to enjoy!