Denali's DM test result came today. While I am very happy that she did not test as "affected," it does indicate that she is a Carrier.  As a fluff coat, she was never considered for breeding. She was spayed at six months of age.
Denali was born June 2, 2003. She is one of the SUV and Truck litter (Baha & Trooper).  There were six puppies, two girls and four boys.
Denali - female, here with us in California.
Terra - female, with Gwen in Oregon.
Dakota, a.k.a. 'Kota - male, with Traci in Arizona.
Max - male, with Alan and Vickie in California.
Forrest/Charles - male (now named Charles), in a home in Oregon.
Durango - male, not sure where he is now, Carolyn will have to help me out.
Here is the official OFA result for Denali.
The pedigree appears below. 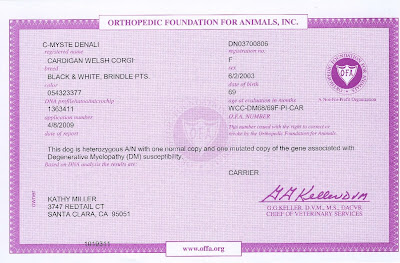 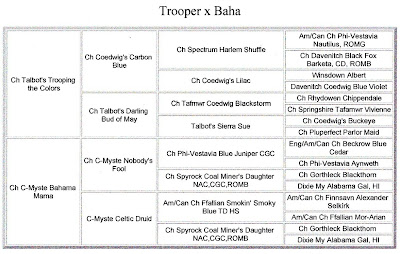 So glad she did not test At Risk. phew!

Glad to hear she's not 'At Risk'. Riley (littermate to Bahama Mama) also just tested out as a carrier.