Sage updates: This little bundle now weighs about 18 pounds. He's doing really well, and is very curious.
Due to his early digestive issues, his vaccination schedule was delayed slightly, so his last set will happen this week. That has meant that he's been more of a prisoner of the house than I would liked.
And so....although he is a little older than the ideal age, we started puppy kindergarten yesterday...what a panic that was! But it was REALLY good for The Bug.
When we first arrived, he was barking and overwhelmed by all the other dogs (about 10-12) and all the activity. But there was a good mix of dog sizes and he quickly realized that the Puggle next to us was a nice girl. By the end of the session he was out on the floor, saying hello to everyone and had discovered that the Goldendoodle on our other side also really likes to play!
He also decided that freeze-dried liver treats were a pretty good deal! (He's not a food-motivated dog and oddly, doesn't get real excited about eating - even though he's getting raw meat & veggies!) 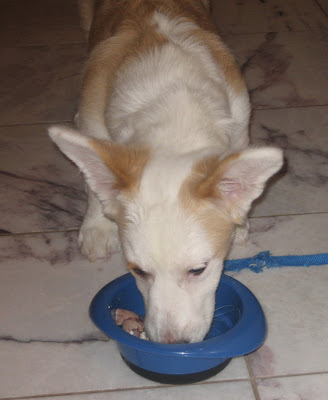 Wednesdays are "special food" nights. This past week, it was chicken hearts and gizzards...that got his attention! 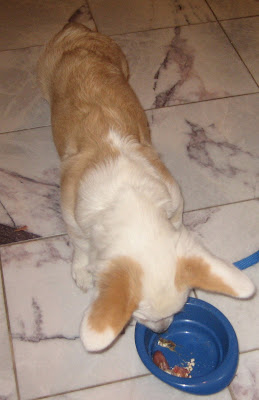 Food dish=empty in no time! 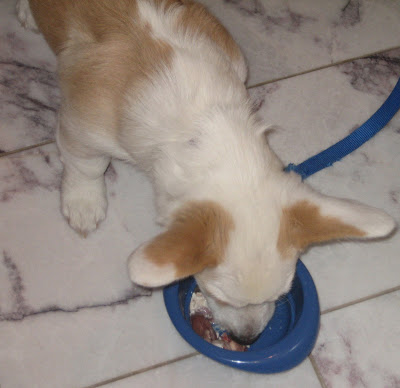 I think his color is still darkening a bit more. You can really see it behind the ears.

He loves to hang out in my office with me. If I close the door, he finally settles down enough to take a nap. But the moment Denali is available, it is all about playtime!

This is a beautiful puppy...more so every day. And they don't get any sweeter!
Posted by Elbeepem at 1:49 PM