How do you make sure your puppy looks like this at the end of the day? Keep him really busy! Sage's activity calendar was full today, culminating with the first meeting of his second series of puppy training classes. 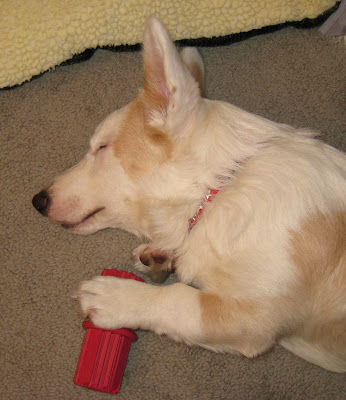 (Candid pose - seriously!)
Gotta say, I was a little skeptical about puppy training classes. I figured it was primarily for the puppy-to-puppy socialization. Happily, I was really wrong about that!
Sage started his second series of puppy training classes this evening. The first session was six meetings. Now we have another six weeks. In the first session our dogs learned a lot. In addition to being introduced to all sorts of other dogs and all sorts of other people (many bring their kids to these classes too), the puppies have actually learned all of the basic obedience commands, and then some.
Sage can now execute come, sit, down, stay, and  on-your-side (still working on "stand"). He even sits reliably when called to come. He also knows that "leave it" means he can't charge for a treat, but must wait to be released. "Off" means to back away from anything he's focused on at that time. "On your bed" means to get on the mat, bed or just the area I'm pointing toward and lay down. He's also learning that "walk" means to walk nicely on a leash. It looks like he might be relatively easy to heel train..Yeah!
I know that I taught Denali all of these same things, but at that time I had Bart around to help me. Denali watched Bart and modeled after him...it was so easy. Bart really trained Denali while I supervised.  He did the same with Kenai, even though she was a much older puppy, coming to us at 10 months of age.
Even though Denali knows all of this stuff and executes well, she's very pushy about having all of the food rewards for herself, so she's not a good formal training companion. No question, Sage has learned a lot from watching her, but I can't work with the two of them the way I did with Bart as a demo dog.
Fortunately, Sage is an excellent pupil. He's really smart, catches on so quickly, and the challenge is to keep him from getting bored with the exercise. He actually seems to have a bit more focus than Denali did at this age (no surprise!)
Tonight's session was very good. We started working with clickers. Although I've now trained a number of dogs, I've never used the clicker, so this was a good new experience for me too. This class has fewer dogs, about eight, versus the twelve in session I.  It makes for a better class.
In the group Sage's sweet temperament shows itself, as does the corgi in him. When all of the puppies are released to play, Sage first makes the rounds of all of the people standing around. He smiles and does his best to look so cute that no one could resist giving him a treat. So he gets the extra treats, while all of the other puppies are wrestling. Sage has Denali at home to wrestle, so this isn't as crucial to him.
After sucking up to everyone, and checking the floor for crumbs, he's then ready to join the fracas. He's a perfect medium dominance level, doesn't push to an extreme, but won't let another dog take advantage of him either, no matter how big they are. He smiles the whole time!
There is a playful little terrier mix, just about Sage's size and the two of them had a meeting of the minds when it came to play styles. So when he got home, it didn't take long before Sage looked like this: 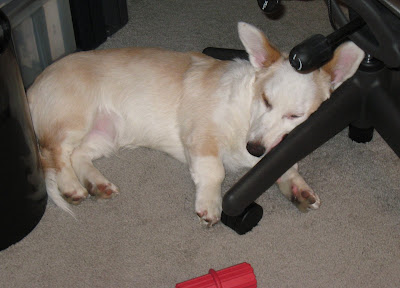 He found his favorite spot, right there in the chair legs, and passed out. 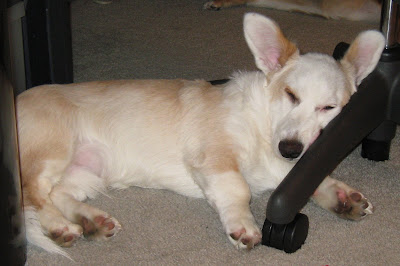 Earlier in the day he accompanied me on errands too,
so this was a big day in Puppyville!
Night, night Sage! Sleep tight!
Posted by Elbeepem at 8:45 PM