A Message from Denali

My Little Brother:
Now that I am the Alpha Queen of the household you'd think that life would be easier - scratch that! In fact, much of my new responsibility centers around keeping my new little brother, Sage, occupied and out of trouble. There are times when I just "tell on him, " kind of like Bart did with me when I was a puppy. 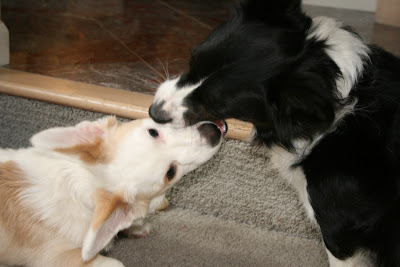 Admittedly, most of the time I really like playing with him. He's really smart and catches on quickly. During this past month Sage has demonstrated an ability to use logic and mount strategic attacks, causing me to invent new counter measures. At times he figures things out a bit too quickly, and I have to change my tactics on the fly.
He's old enough now that he's lost his "puppy pass." I've been clear with him about the limits and he quickly learned not to question my authority when it really matters. All of this has prepared him for his Puppy Kindergarten classes, where he has to interact with about a dozen other puppies of all sizes and temperaments. 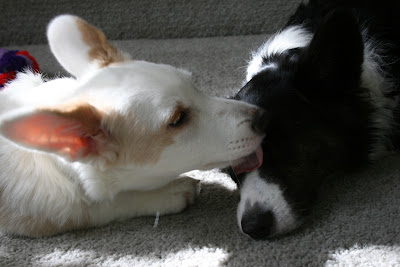 Now that Sage is getting older he's also beginning to learn that he has some responsibilities to his older sisters. This morning he washed my face and Elbee's ears. I have to say, I'm beginning to get attached to this little guy!
Posted by Elbeepem at 1:44 PM