Is that a Fluffy? 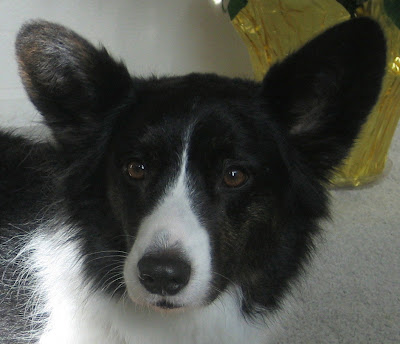 Those of you who own Cardigan Welsh Corgis, admittedly a relatively rare breed in the U.S., have gotten pretty used to people asking things like, "Is that a Border Collie/Bassett Hound mix?"
Or, one of my personal favorites: A gentleman saw me out walking Kenai years ago and said, "Oh, that's one of those Dandie Dinmonts, right?"
Sigh...yep Kenai was a Dandy, but certainly no Dinmont!
But today an amazing thing happened. I took Denali up to San Francisco for an obedience workshop...where she did horribly at an indoor venue that had been host to a HUGE dog show a week ago. The ground still smelled like a million other dogs. She was SO distracted that she couldn't concentrate on heeling to save her life...and she actually stood up from a long down just to sniff....which she has NEVER done...ever!  So, OK, it was all about the experience of being indoors for the first time...chalk it up!
But, as we were waiting to go into the ring for sits and downs a woman holding a yellow lab kept looking at Denali. I was ready for the Border Collie mix question, when she said, "I've just got to ask, is that a Cardigan Welsh Corgi Fluff Coat?"
Well, blow me away...I was completely amazed. NO one has EVER gotten the fact that Denali is a fluffy before! I replied that she'd just won the prize for the first person ever to know that. I started telling her about Denali's Glamour Coat when I realized that the other people waiting to go into the ring, as well as the ring stewards and judges, were ALL listening to me. Most of them had never seen a CWC before, and none realized that there was such a thing as a Fluffy. The ring steward had actually started to put "Pembroke" down when we were signing up and I had to correct her.
So...today Denali was a star, but in a different way than I'd hoped. Even when the yellow lab was overly friendly and in her face, she was a Good Girl. So, this wasn't a day for heeling, but it was Denali's day to show everyone what a Beautifooool Cardi, with a gorgeous coat and tail, and nice ringside manners looks like! There will be other days for heeling. 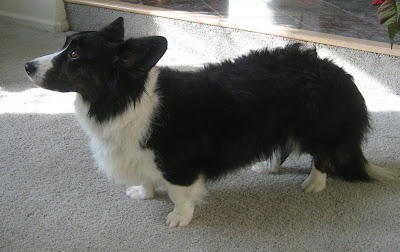 Denali - after a bath, looking her fluffiest! 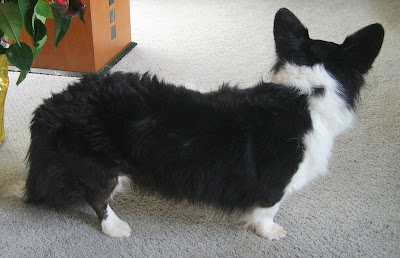 I've always loved her "polka dot" on her collar! 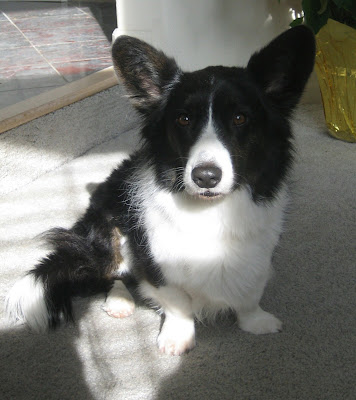 not so much with Pixel...most people don't try to guess..I did get Australian Shepherd puppy...a lot...