At 17.5 weeks, we have a bigger "Bug" with much darker cream (red) coloring.  When I picked him up this morning, I could tell he was heavier. Sure enough, he's now up to 16 pounds! That's twice what he weighed when we brought him home on December 29.
As of this week he now looks much more distinctly like a creamy-carmel colored dog, with white markings, instead of just a light-colored dog that was kind of a mottled pale cream.
I took these outside at +1 stop to try to get a more true rendition of his color. Being a very light colored dog, he tends to wash out, as the camera compares him to the background and compensates when in automatic mode.  So although the grass looks dark in some of these, they are a much truer rendition of Sage.
The poses are nothing special - just to show color. It is hard to get Sage to stand/sit still long enough to get a photo, let alone a good pose.  And yes, the leash was in perfect condition when Sage first came home. During leash bonding/housetraining he chewed it apart a couple times and Moe mended it - using white carpet thread (attractive, eh?) 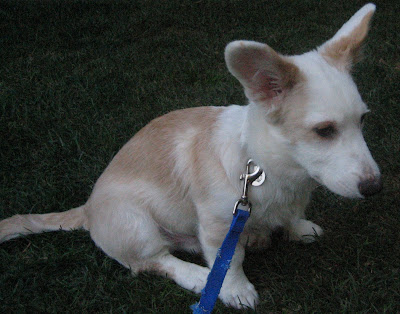 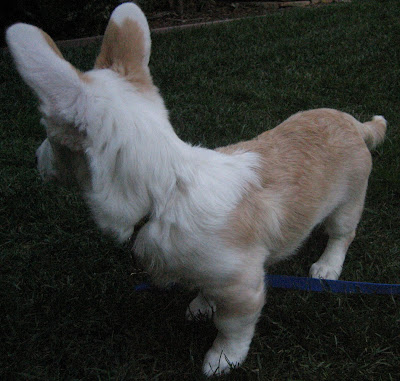 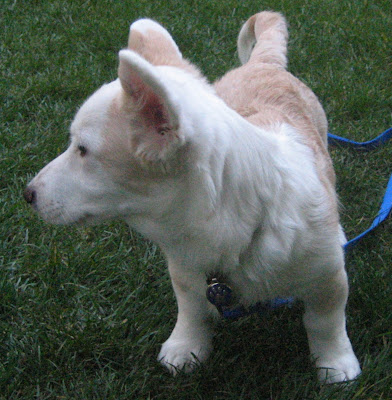 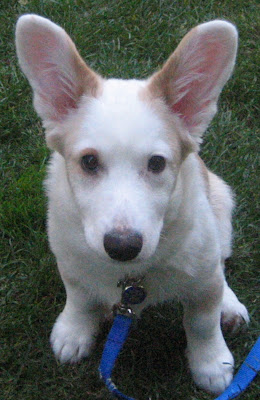 I think he has a beautiful face - He's got a small cream circle around the right eye. It has become more prominent recently.
Posted by Elbeepem at 8:32 PM

I have you on RSS and his color is coming in so nicely! He is gorgeous! Thank you for sharing and allowing me to watch him as he grows.

Aww! The creamsicle is getting richer! heehee

He's got a Hannah kinda expression. Maybe someday you'll get to meet her and Babaganush (wally)

I'd love to meet Hannah and Wally. Carolyn says that Sage has got her sweet personality. I guess we ultimately have Alice to thank too!