Today this wonderful card came in the mail. This is a picture of Scooter, a great little guy who came from a situation in which his owners just didn't connect with him at all. When they surrendered him to a shelter in north/central California, he was in bad shape. He was terribly overweight and had an awful bacterial infection in his intestinal tract. Truthfully, it is good that I never met his former owners. Their ears would still be ringing with the sounds of my voice chiding them for treating this nice dog in this way.
But, this isn't about that. This is about the 180-degree turn that Scooter's life took when he came to ForPaws Corgi Rescue. He stayed with us till we were absolutely certain that he was cured and had lost a good deal of his excess weight. He still has some to lose, but his new owners are loving and conscientious and he will be a streamlined version of his former self in no time.
When they came from southern California to get Scooter recently, we were just delighted to meet them. SUCH nice people and exactly the home that Scooter had been looking to find. Today, this wonderful card appeared in my mailbox. It is so wonderful that I just had to share it! 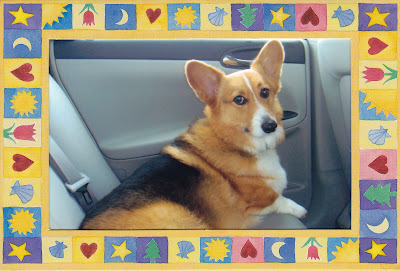 This is the front of the card. A picture of Scooter on his way home.
Scooter is a dog that likes people much more than he likes other dogs. He was in foster care for awhile and became very attached to his foster mom. We always know when they've found their people when they do what Scooter did: The car door opened, he hopped in and never looked back. Instead he was looking anxiously at his new owners, asking when we were going to "go home." How do they know? I don't know, but I've seen it happen over and over with the rescues. Once their "people" show up, they know! 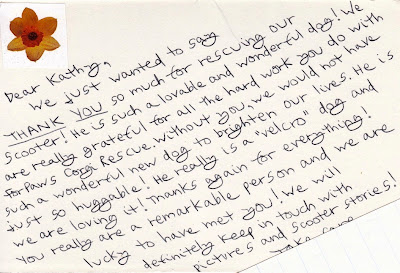 This is what the card said. The signature has been obscured to protect privacy. I don't really need to comment. The card says it all. Do you think Scooter found his home, or what?

Enclosed was a generous donation to ForPaws Corgi Rescue. Certainly we didn't expect this and I was overwhelmed when I opened the card. I called Scooter's foster person and shared it with her. We were both incredibly touched.

These are the moments that remind us why we spend the hours, why we persevere when things aren't going well - because when the dog finds a home, there is nothing like the rewarding feeling that goes with it. It is almost as good as the day when each my own dogs joined our home.

And I am reminded of the day when Bart walked up to me in 1997. The voice in my head was saying, "Oh, he isn't what I'm looking for at all." Then he sat at my feet, threw back his head and showed me the biggest smile imaginable. The voice in my head said, "This is Your Dog!" (Or was it really Bart talking?)

Over and over again, that voice tells me when a foster dog has found its rightful home. Scooter, you're just as lucky as Bart! Congratulations on a wonderful home and a wonderful life!

HUGE Thanks to S. and C. for giving Scooter the home he was meant to enjoy, and for your generousity. You've just given another wonderful dog a brand new start!

Warm wishes to you, and a big belly rub for the Scoot-man!
Posted by Elbeepem at 8:31 PM

Oh, I have tears in my eyes. Wonderful!!

What a great, great story. He is such a handsome fellow, and you can see in his picture that he just wants to be happy and live life to the fullest! Congratulations to the whole family!