Yup, it rained - just as predicted.  And a high wind advisory was out for the Bay Area bridges. I was so glad we had the SUV, not my Beetle, when we went over the Benecia bridge! During the 1.5 hour drive to Vallejo, I kept hearing the flood warnings pile up on the radio.
By the time we got to Vallejo at 8AM, it had been raining steadily for close to three hours and there was a little stream flowing in the street in front of the building. Thankfully, they let us drive into the fairgrounds and park right in front of the building on a paved surface, versus the usual dirt parking lots and mile-long trek to the buildings. I was so glad that I'd brought my knee-high rain boots. I had our setup all packaged in plastic garbage bags so I went in first and set up a nice dry spot for us.
Then I went to get Denali.  My little Oregonian Duck Dog (new breed?) wasn't phased by the rain, or the puddles. She walked up to the little stream, carefully calculated the distance, and hopped right over. Prancing along as if nothing was happening she walked right in and played the "towel game" with me.
Those chamois towels are awesome! Denali is a fluffy and she managed to suck up a lot of water on her way from the car. One rub down with the chamois towel and she was dry again. And the towel dried out in no time so I could use it again after her breaks. This item is a must-have at shows!
In the morning Denali was definitely "on" and she did very well, racking up RAE2, leg 3. I hung her ribbons on her crate to give her inspiration for the afternoon show. 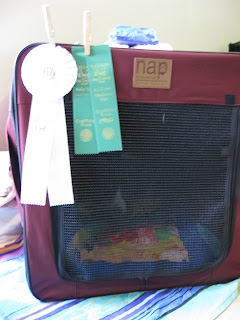 She always gets nice cozy padding, in her crate, but she tends to push it all to the front and lay behind it. All you can see is her muzzle peeking out. Silly dog. 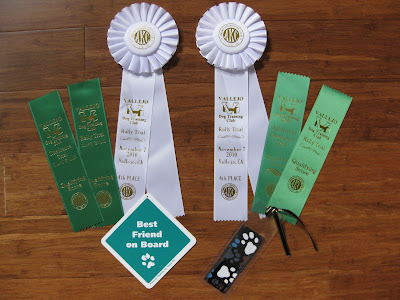 The inspirational ribbons paid off, as she repeated her performance at the afternoon show.

As a short dog, Denali was first-in for all of our classes. As things progressed it looked like our 95-point score was the one to beat in the Advanced Class. But ultimately there was a 3-way tie for the 2nd, 3rd and 4th spots, with the winning dog scoring a perfect 100 points! The other two dogs were full-sized Aussies. No way those 5" corgi legs can beat the time against that competition.

But when we finished our run, and I was attaching Denali's leash, the judge stopped on her way to the table with a little smile and quietly said,"Nice job!" It's not often that a judge gives compliments while you're still in the ring. Duck Dog done good! (I think this judge likes Cardis. She complimented Denali again when she gave us our ribbon for the last show of the day, "Very nice little dog you've got there.")

Both shows were sponsored by the Vallejo Dog Training Club. They did something really clever that I hadn't seen before: Any one who got a placement received a little card which was redeemable for a little prize. You took your card to the front table and got your choice of items. In the morning they had a number of cute home-made laminated book marks and in the afternoon the 4th place finishers had their choice of little signs, each with a different dog-related phrase on it. The signs came with an itty bitty suction cup so they can be mounted in your car, or on any window of your choice.

At the end of the day it had stopped raining briefly. Denali hopped the little stream again, approached the car and gave me the "I'm ready to go home smile." I arranged her kennel padding for her, lifted her in, and she was so tired that she actually slept on it all the way home!

I got the last "Best Friend on Board" sign. I can't imagine a better description for Denali!
Posted by Elbeepem at 10:01 PM

Great job, you two. Denali really is a trooper -- and you are no slouch either.

Denali - you're awesome. Simply awesome. Way to go Team!! :)
Ironically, Denali's brother does the same "shoving of the padding" thing. He'd rather lay on the actual crate itself.... silly goon!

Good job! Was thinking about you guys all day!

Yay Duck Dog! Good job guys. Sounds like your prepping paid off and you made it through a potentially miserably day fairly well. Congrats on your hard earned ribbons (and prizes!)