Typically I get a fair amount of mail from people who want to alert ForPaws Corgi Rescue to a corgi, or corgi mix, in a shelter that doesn't have much time and needs urgent help. But earlier this week I received six messages in twenty-four hours, four from people who've never written to me before, about a nice female Pembroke in a high kill shelter in Modesto, CA . It seemed as if everyone in northern California was suddenly lobbying for this dog!
"Gypsy" had been there for thirty days and was almost out of time. Her owner had lost his home and had to surrender her. One easy phone call to the shelter and she was rescued. I wish I'd known about her sooner! 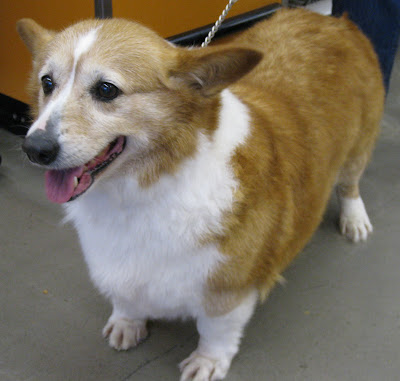 When we arrived to pick her up, this sweet girl greeted us with kisses. A sweeter, more well-behaved dog I've never seen. She is amazing! She was a little nervous about leaving with new people, but traveled easily in the car, allowing us to pop her in a crate without issue. 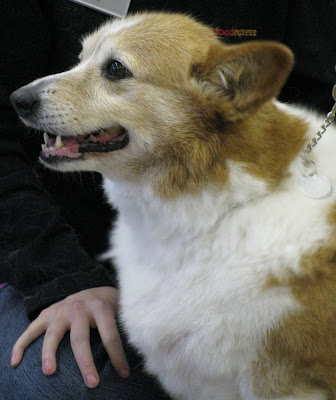 Because she'd been in the shelter for so long, she really smelled bad! And she was visibly extremely dirty. Typically we don't stress a dog during the first few days by attempting to bathe it, but there wasn't a choice in this case. 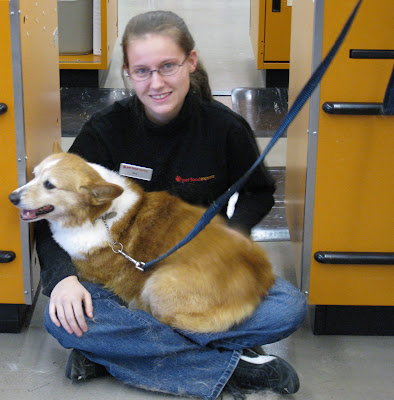 On the way home we stopped at Pet Food Express, where Gypsy spent an hour in the self-service bath tub. Two shampoos later, this gorgeous dog emerged from what had been a dull, brown mat of thick fur. She was incredibly well-behaved with everyone she met. In no time she had the staff at the store fawning over her. She charmed everyone and was in her element sitting in Gina's lap receiving attention and treats. 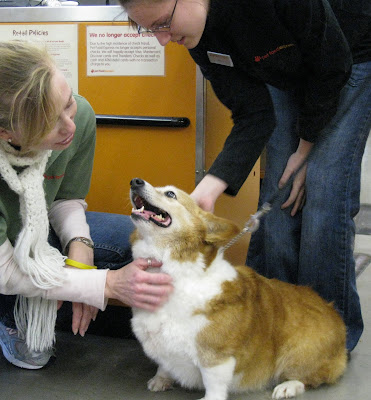 She is quite overweight and will be on a diet, starting immediately. But its easy to see how beautiful she'll be when she's dropped some excess pounds. This was definitely Gypsy's lucky day! She will spend a little time in foster care, getting back in shape, and early in 2010 she will find that perfect forever home. Someone is going to be totally thrilled with this lovely girl!
Happy New Year Gypsy - 2010 is going to be a great year!
Posted by Elbeepem at 5:24 PM

I'm sorry to reach out to you through a blog post, but I didn't see an email address on your blog. I am in Northern California and am interested in talking to you about adopting Gypsy when the time is right for her to go to a new home. Please feel free to reach out to me at julie.sota(at)gmail.com. I already have one rescue corgi I'm bonkers for (hence the blog devoted to him) and I've been looking for the next rescue to add to my pack.

Aww. She looks like a sweet ol gal. You'll have a waiting list for this girl, I'm sure! Thanks so very much for all your hard work in rescue. I know the dogs appreciate it as well as the families that end up with these otherwise unwanted dogs! Hugs from Greta and the pack.

Gypsy is supposed to be five years old. She does look older at first, but a lot of it is just the excess weight. In examining her teeth and observing her activity level, I really don't think she is any older than 5 years or so.

I have been looking for a Corgi for quite some time and was delighted when I spotted Gypsy on your site. I would love to meet her and possibly adopt her. Please contact me at 530-200-4392 or at kdavies@tehamaed.org
Thank you so much!! I am a single woman age 46 with lost of time and love to share with Gypsy!
Karen