An awesome day for Denali! She was a little gem in the ring!
(Unfortunately the person taking pictures was using my camera and didn't know how to turn off the flash, so we got really poor photos. Most were too dark, and this one makes it look like I sat in chalk dust...very odd!) 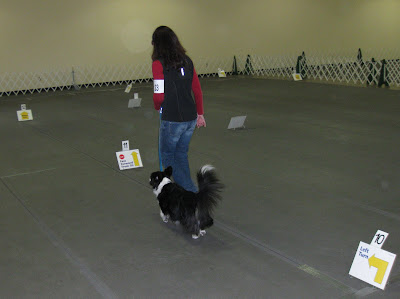 Today we had a judge who was a stickler for a tight leash. She even made a point of announcing that fact just before our class showed. And, the course had a lot of right turns - just the place where Denali lags and pulls the leash!
But today, she did a fantastic job! As we left the ring, other exhibitors on all sides were saying "That was beautiful," and "I think you got 100!"

There were only two dogs showing after us, and I was still talking to people who were admiring Denali when one of my obedience club friends rushed up exclaiming, "You won!" As she did yesterday, Denali smiled and looked disgustingly adorable to her admiring public, soaking up the compliments (and the liver treats).
The tight leash was a factor, costing us one point, but no one had a perfect score. So, with a score of 99, Denali finished in the Blue Ribbon spot today. Whoohooo!!
AND, this was her third leg, so she earned her Rally Novice title.
She's now officially:
C-Myste Denali, RN, CGC
(Looks like another title holder for the C-Myste "Parade" Carolyn!)
And many thanks to Denali's brother, 'Kota, who sent good luck wishes for today. I am sure they made a difference! Hugs to you 'Kota!
Posted by Elbeepem at 1:30 PM

It wasn't 100, but it was PERFECT! Congratulations are definitely in order. Yay Denali, Yay, Kathy!

Was thinking good thoughts all day. Way to go!

awww - I'm so excited for you!!!!! I love Rally! It's so fun! Her Brother never placed in the ribbons and JUST qualified sometimes, but a qualifying score all the same ;-)

congrats!!!! good for you and for Denali!