This morning was the annual running of the Wharf to Wharf Running Race from Santa Cruz Beach to Capitola Beach, six miles away, in Northern California. The course takes you along the edge of the beach and many places along the route afford beautiful views of the great Pacific Ocean.

Course Map - Click on map to enlarge
This is a favorite race among many seasoned runners, as well as casual runners and walkers. It also has more character than just about any other race I've run. As it winds through the residential beachfront neighborhoods, there is a multitude of bands playing music (about every half mile), as well as people in costumes - just because!
Some of the entertainment is well-known and returns every year, like the Taiko Drummers and Robot Man. Others pop up for one-time cameo appearances. My personal favorite was about five years ago when a group did a take-off on the band, "Kiss." Four people, dressed from head to toe in skin-tight black and white zebra suits made an appearance. They found an old Dodge Dart convertible, and somehow managed to dress the entire car in the same zebra skin! As you ran by, you saw the band performing in front of the parked car. After the race, the car, with the band members all hanging out of it waving and singing, toured the streets of Capitola and Santa Cruz...what a kick! This year "stilts woman" was a newbie! She looked like Red Riding Hood...on stilts! 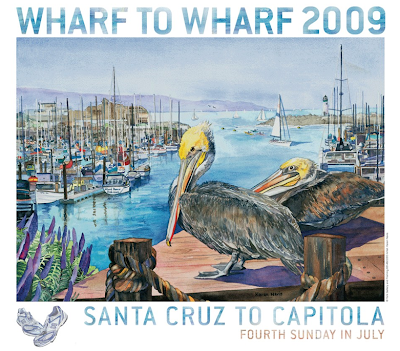 The tag line for this race is, "It's the Best Little Road Race in California." This was the 37th running. I've run this race so many times that when I sign up each year and the application asks how many times you've done it, I have to make up a number, as I've lost count. My long-time friend, Jennifer, almost always accompanies me, as she did this morning. It's become kind of a special tradition for us.
Each year a local artist contributes an original work for the official race poster. This year it was especially lovely, as shown above. The same pelican theme was used on the T-Shirts, and they were really classy this year! 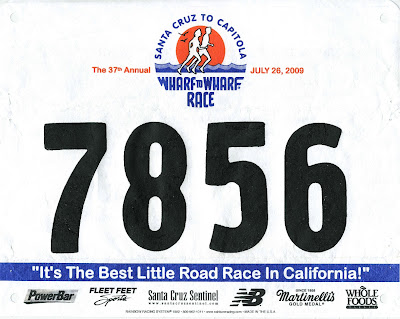 This year's race was especially meaningful for me. For the past two years I've been grappling with a back injury that has been incredibly slow to heal and has kept me sidelined from this event for 2007 and 2008. It is a fairly rigorous course, with a lot of hills - not good for a recuperating runner.
Nonetheless, this morning I found myself able to run it more easily than I'd imagined without having to stop and walk at all. While the finish time was my worst ever for this race, it was not nearly as slow as I'd anticipated and I was just thrilled to run "pain free."
Due to major road traffic we were delayed getting to the start and when the gun went off we were all the way at the back of a 15,000 runner field. This race runs on narrow streets, and always gets really bogged down for the first 1-2 miles or so, and the field remains pretty dense throughout the race, with not a lot of room to pass others. As we finally passed over the official starting line, I remarked to Jen that the "Kenyans are already at the half-way point." (Yes, some of the most famous world-class runners come to do this race each year! No kidding!)
Normally I try to be up around the 8-minute milers to start to avoid a lot of this, but it just didn't happen this morning. As a result, I was still passing people as I approached the Finish Line. This isn't a chip-timed event, so the clock at the finish indicated that I was about 7 minutes off of the actual start time, finishing in a "real time" of about 1:02:55.
It was a perfect morning to run at the beach and I remembered just how much I've missed being able to do so. Over the years I've run a lot of 10K races. I don't generally save the bib numbers, but this is one I think I'll hang onto for awhile...just to remind me how much fun running is!
Posted by Elbeepem at 12:13 PM

A great way to sepnd the day. So glad you were able to run it comfortably and finish. 'T would be hard not to stop for photos.

Sounds like you had a great time!My husband was born and raised in that area and still has a ton of relatives and friends in both Santa Cruz and Capitola. It's a lovely area for sure.

Wharf to Wharf was my favorite EVER! Did the "crew" from the Crow's Nest Cafe still bang all their pots and pans as the runners went by?

I've got to get back in shape so I can run these races again.

You know, I was looking for the Pots & Pans crew too, but I didn't see them. But, it is entirely possible that I missed them.

Starting so far back, it was really "work" to maneuver continually around all of the walkers and slower runners and the crowd stayed really dense throughout the race. A lot of time was spent finding "holes" and I know I didn't see as much of the scenery as a result.