Sage is a Winner (Again) in Puppy Class!

Tonight was Puppy II Class session #5 of 6. In contrast to last week, when Sage was more like a crazed-puppy-on-drugs and couldn't focus or behave for a moment, tonight he did so much better.
Clearly heeling is going to be a real challenge, but he's only six months old.  In the kitchen during morning training sessions, he does really well. He even has the automatic sit and the right side Finish figured out. But in class, with all the distractions...forget heeling. Crazy puppy takes over! More practice!
Two weeks ago we had a class competition in which the puppies were given thirty seconds to do as many "sit," "down" and "stand" position changes as possible in that time frame. We could use verbal commands and hand signals, but couldn't touch the puppy.  Sage was the winner with 15 changes. He claimed the prize, a loofa sponge ball, which he immediately coveted and started to shred.
In tonight's competition he was one of two winners. Puppies were to hold a "stand-stay" while we walked a complete circle around them.  Sage, and one other puppy, were the only two who could successfully execute.  Sage also did well at the long down-stay and quickly formed the association between touching his nose to a bell and getting a treat. He is a "thinker."
For his stand-stay Sage won a new fuzzy bone (stars and stripes). He was thrilled when the teacher gave him his prize and quickly took it back to his mat. He was equally thrilled when we got home and I gave him his new toy.  He had a blast playing with it and I got a lot of great shots. Here are some of the best!  What a Happy Boy! 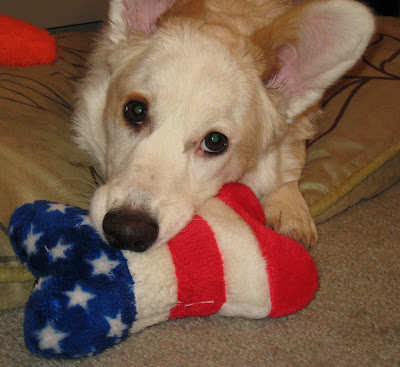 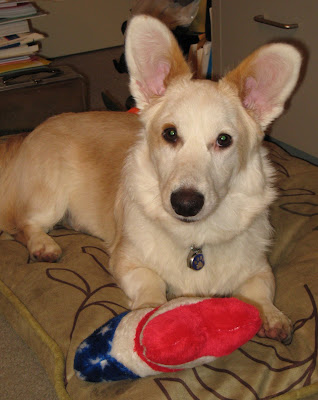 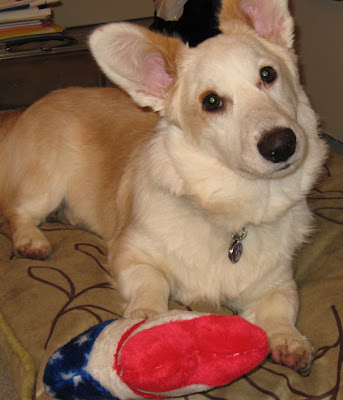 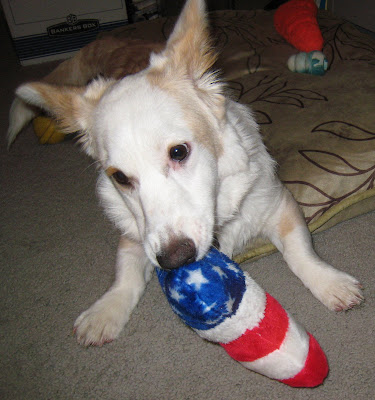 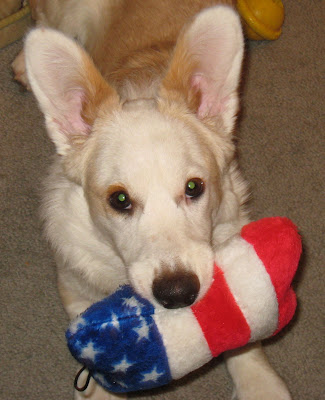 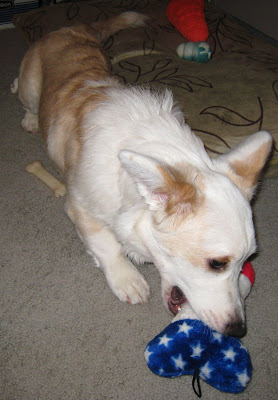 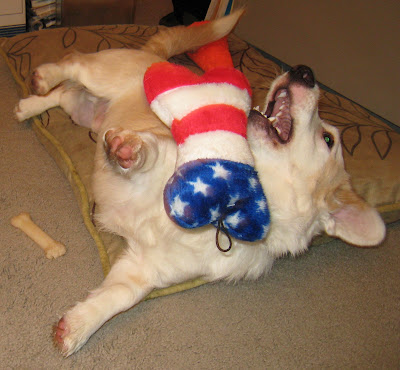 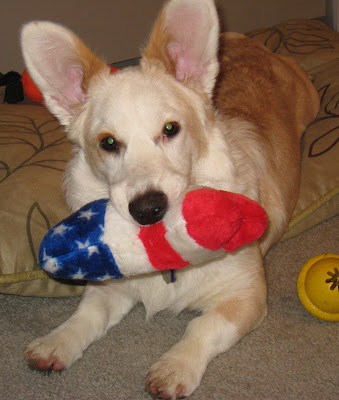 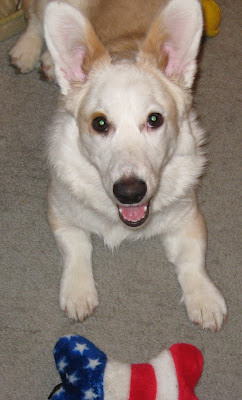 Next week is Graduation Class. We will be practicing our Emergency Recalls by playing hide-and-seek with our puppies in class. We're also encouraged to bring our cameras, so hopefully I'll have a "Class Picture" of the Graduates to share!
Good Job Sage...I'm proud of my smart and spunky puppy boy!
Posted by Elbeepem at 9:11 PM

He's so eager to please -- you'll be able to teach him everything. He'll be happy about it!

Good puppy! You're making your grandma(s) proud. These really are extraordinary puppies in every way.

Keep up the good work.

Good job Sage and Captain sends his best as he is off to Woodland this weekend for his first show then in Vallejo next weekend.

So Sage lives up to his name and is top in his class! He has looks, brains AND personality!