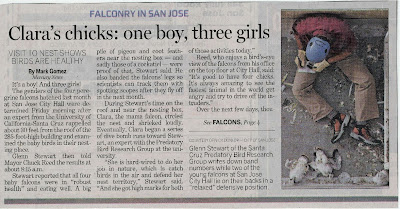 For the fourth year, Clara, a Peregrine Falcon, is raising her young in a nest located on a ledge of downtown San Jose's City Hall building. As a formerly endangered species, this is significant and has been a source of great interest and pride to the San Jose, California community.
Today's local newspaper featured an article about the four chicks, currently occupying the nest. Within a couple weeks they'll be ready to fly and will take their place in the wild. You can learn more about them and view the chicks in the nest via webcam by clicking here. You can also see a video of identification bands being attached to each chick so that their movements can be tracked in the future. There are also other good video segments of the birds, including this one of the chicks being fed (not for the faint of heart).
Clara returns each year to this spot to build her nest, always with a different suitor (shameless hussy). Once a falcon has declared a nesting spot, they return to that location each year to build a nest and raise the young. The first time the falcon pair showed up on the ledge at City Hall it was quite an event. No one could figure out why they chose that particular spot in the middle of a bustling city environment, but clearly Clara, (named for the City Hall's location on Santa Clara street), is dedicated to her choice.
click on articles to enlarge 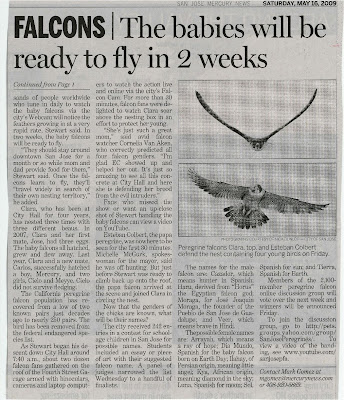