Today Denali and I took a Road Trip up to Martinez Shoreline Regional Park. The Mt. Diablo Dog Training Club was sponsoring an obedience workshop. This was a first for us.
We've been training in the Show Novice class with our local dog training club, but I knew that we weren't ready for official competition yet. This type of a workshop simulates the competition, but without the pressure of an official event. Even so, having never been "in the ring" before, the idea is a bit daunting. At the last minute I got the courage to sign up for this workshop and it was a great experience! 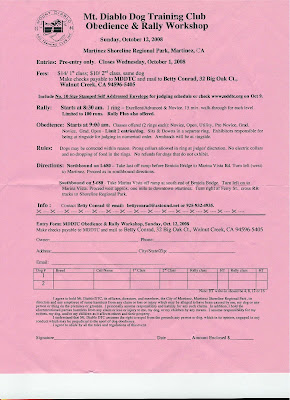 The Martinez Shoreline Regional Park proved an excellent venue. It has a lot of nice open grassy areas, surrounded by beautiful big shade trees - perfect. (Yes, I forgot to take my camera...mental note for next time!) And the Club did an wonderful job in organizing the event.
For those not familiar with formal obedience, the Novice A level (entry level) requires the dog to do the following exercises:
1a. Heeling on leash in a pattern dictated by the judge with some turns, stops and changes in pace.
1b. Heeling in a figure-eight pattern around two "posts."
2. Stand in place off-leash while the judge does a cursory examination of the dog.
3. Heeling - same pattern as #1, this time off-leash
4. Recall/Finish (sit/stay, then come when called from across the ring.) Execute a "finish" move so the dog is back in "heel" position at the end of the exercise.
5. Long Sit - done as a group. The dog is in line with all other dogs in the same competion level. They're left in a sit/stay while the handlers walk across the ring, then turn and face the dog. The dog must stay sitting in position for 1 minute.
6. Long Down - same as the sit, but in a "down" position for 3 minutes.
Denali had an opportunity to go into two Novice rings, under two different judges. Overall I was really happy with her performance. As expected, she lagged in healing and isn't ready for off-leash work, but I was given some good coaching and tips and used her light line for the off leash portion. She did well with everything else.
In the first ring she was perfect with the stand-for-exam and the recall/finish. We were late entries, so we were almost last and by the time she got to Ring 2 she was tired and not quite as snappy on the recall/finish. But the judge encouraged us to repeat the finish...perfect!
Since it was a workshop, they conducted the sits and downs in a separate ring and just took whoever came along and was ready at any given time.
On the long sit and down Denali was absolutely flawless - with NO corrections! This was made even better by the fact that we were one of only two dogs in the ring for sits/downs at that point and the other dog got up out of the sit and bolted out of the ring about 15 seconds into it.
Denali remained sitting and didn't flinch. When it was time to return to our dogs, the ring stewards and judge were so distracted in trying to help the owner round up her loose dog, that they returned me to my dog, but didn't say "Exercise Finished." I stood waiting, while Denali continued sitting for another minute or two before the judge realized she hadn't ended the exercise.
The long down consisted of Denali in a down next to the other dog, while it was on leash. In order to keep it down, the owner had to stand on the 6-foot leash and she was talking to the dog the entire time. It kept trying to get up and she didn't realize that she was actually encouraging it to do so by continuing to talk to it.
Meanwhile, I am 30 feet away, across the ring and my dog is off leash next to this person who is yattering away at her unfocused dog! The nightmare of this part of the competition is ending up next to a dog that proves to be a big distraction. In this case the dog AND the owner couldn't have been more of a test for Denali!
Again, Denali just stayed in her spot, in spite of the considerable distraction that the other dog and its owner posed. At one point a train went by on the nearby tracks, blowing a loud whistle, and the person in the next ring dropped an armload of gazebo poles as they were packing up (clang)! Denali never moved. I was really impressed! Afterward the judge told me that I had a "nice corgi!" Gotta love it!
Yes, we have a lot of work to do before she's ready for the real thing, but in comparison to many of the dogs we saw today, Denali is coming along quite well and is solid, or close to it, on many of her exercises. It was helpful to have that calibration.
But the best part was that we got to sit in the shade together, watching others and sharing a few pretzles during a break between Ring 1 and Ring 2. I don't normally give her "people food," but she'd earned it!
After her pretzle Denali snuggled up next to me and let out a contented sigh...does it get better than this!
Posted by Elbeepem at 9:25 PM

What a GOOD GIRL!! Her brother, Kota, and I are VERY proud of her! Makes me wonder whether Kota is ready for such an event... i'd be most concerned with the sit/stay and down/stay exercises... but GOOD FOR YOU GUYS!!! :) Yay how fun!!

Yes, there is SO much more to this obedience stuff than I ever imagined - lots of nuances for the handler to grasp! But as long as Denali has fun, that's what matters most! Hugs to brother Kota and his two adorable pals!

I just talked to Bart and he is very proud. Then he took a nap.

Hey Denali, good job. And you have such a nice Mom that spends this special one on one time with you. Gosh we all here wish we could have pretzels. Were they good? Obedience can be fun ... can't it. Good luck as you continue on your path together with Kathy.

Katie and the furkids in Minnesota