It's a very Happy Halloween for Nolan! 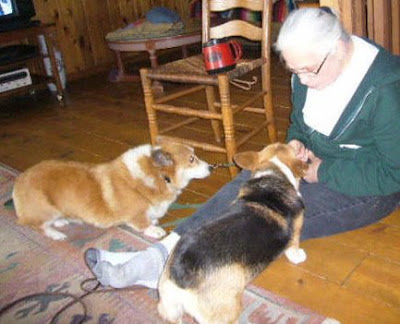 By far the most under-socialized (shy) of our recent CastAway/Puppy Mill rescues, Nolan gained a lot of confidence by having a Role Model. Here pretty tri-color, Ghillie, (also a formerly-shy rescue girl) shows him that meeting new people can be a lot of fun! 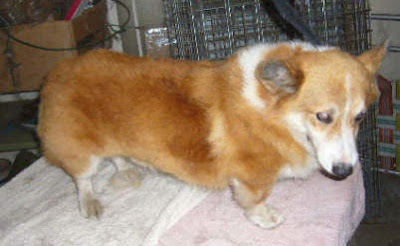 Nolan's confidence has also been boosted by the bond he's formed with his foster mom, K.D., and the excellent care she's given him. After a nice bath Nolan shows off his beautiful coat. This was his first time on a grooming table...a big accomplishment and a true statement of the trust he's built in K.D. 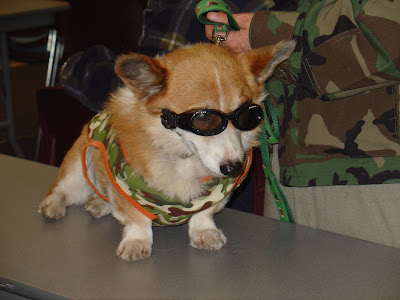 Here's something we never thought we'd see so soon! Nolan showed enough confidence to go to a Halloween Costume Party, accompanied by K.D. and his best canine friend, Ghillie. Commando Nolan made an appearance and was a great hit among the Therapy Dog Group's party attendees. He didn't even mind wearing the goggles...go figure! 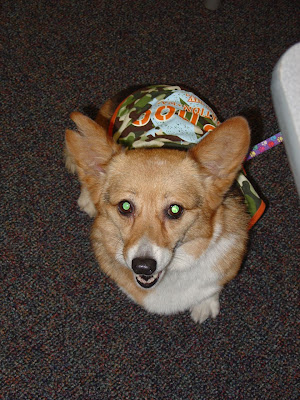 And here's Ghillie in her costume. You'd never know from that smile that this little dog was too frightened even to approach a person when she first entered rescue! Today she's a social butterfly, thanks in large part to the patient work K.D. has done with her over the years! We never thought a "shy dog" could accomplish so much. They never cease to amaze and inspire us! 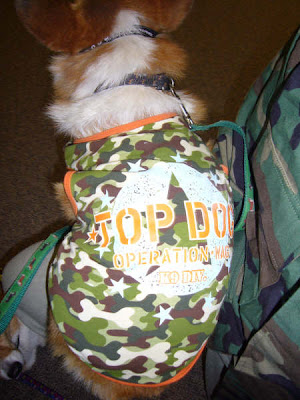 As if there was any question, as to who is Top Dog at this party? To complete the picture, of course K.D. had to dress to match Nolan and Ghillie. Think Nolan is having a good time? Who has the bigger smile? 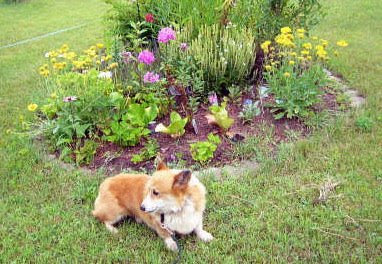 If you haven't figured it out by this time, Nolan has been welcomed as a permanent resident into K.D.'s home. The connection between this dog and his foster mom has been incredible from the start. We can't force a bond like this. It is a special gift when it happens.
Recently K.D. said, "I look at Nolan and he just makes me smile! I can't imagine him living anywhere else!"
And neither can we!
Congratulations Nolan - you couldn't have found a better home and we couldn't be happier for you!
Big Hugs, and Happy Halloween, from ForPaws Corgi Rescue!
Posted by Elbeepem at 12:28 PM

That's great news, Nolan!!! Congratulations on finding your furever home and making K.D. a "foster failure"-- I know lots of folks like her! =)

While I am trying to interpret the phrase "foster failure," as being delivered with humor, nonetheless I find it a highly inappropriate label for this situation.

The Facts are These:

ForPaws Corgi Rescue is an extremely reputable rescuer and we've been placing corgis for over 10 years. During that time we've seen that one of the most challenging of the "special needs" dogs is the "shy" temperament.

It takes an extremely patient and knowledgeable caretaker to provide the reassurance and socialization that these dogs need to become comfortable in the world. Very often this process takes many months, of not years, when a dog of Nolan's age (6-7 years) is involved. Few foster people have the patience or the desire and skill to work with these dogs effectively.

Foster person K.D. offers great value to our organization as someone who has been successful in rehabilitating shy dogs and preparing them to enter new homes; homes they wouldn't have been able to handle without that special care and training.

Sadly, K.D. lost two of her own treasured canine companions in the recent past, as age overtook them. When it became evident that she and Nolan had a special connection, it was a great gift for all concerned: A gift of the heart, as well as the home.

And so now a very special person has a very special animal companion in her life - the fit was "right." If you've ever tried to find just the right home for an under-socialized shy dog, you know that it isn't easy and quickly accomplished, but requires extensive and careful screening.

In this case, we've been considering this placement carefully for some time. The fact that Nolan's foster person proved to have just the right combination of love and understanding to make this work is a great gift indeed! This hardly can be coined a failure!

Nor is it a failure that of the other five dogs that K.D. has fostered for us this year three are already in happy new homes with others and the remaining two will find the right homes very soon - when they're ready.

I can't imagine that you really know "lots of folks" like K.D. because from my experience people possessing this rare combination of knowledge, heart, and the ability to read a dog, know just what it needs, and make a special connection with the animal are Rare Gems indeed!

K.D. has been instrumental in saving many canine lives. She brings a rich depth of knowledge and history in breeding, training and caring for dogs. We are exceedingly fortunate to have someone of her caliber as one of our foster people. And, hey...if she wants to adopt a rescue dog as her own, I can't imagine a better home! Nolan is one very Lucky Dog!

It was being delivered with humor, thus the use of quotes and the smiley face. It is not my intent to insult anyone who is helping this breed which I love. I am on a site in Indiana that uses the term to identify someone who has fostered a dog & decided to keep them- many people on the site end up falling in love with their fosters and they give them a place in their family as a permanent member. I was under the false impression that the term is widely used with the same affection that it is used on my local site.

My experience with rescuers/fosters has been extraordinary. Carol B rescued Charlie for me & he came into rescue as not only undersocialized and shy but we believe he was also abused due to his reaction to certain situations. I have worked with him to bring him out of his shell and provide him with confidence & trust, and I am happy to say that today he is a loving sweet curious corgi who will always be my 'heart dog'. I cannot imagine life without him.

I often attempt to contact rescuers with emails of thanks or encouragement as I see their stories of contribution online & am moved by them. I cannot make a monetary donation to non-profits at this time, so I hope that my words of affirmation are met with acceptance. If I knew that my emails were not welcome, I would stop sending them. Nolan's story touched me because he reminded me of my Charlie.

My goal is to always have a corgi in my life, thus I feel that my ongoing education is critical to my successful interaction with the breed. I learn as much as possible thru interacting with other corgi people, and I applaud those who have the time and talent to devote to rescue.

Again, my best wishes to Nolan and K.D.

Thanks for the clarification. We were hoping it was something like this.

In over 12 years of corgi rescue work, communicating with hundreds of people all over the U.S., I've never heard "foster failure" used in this manner. That, followed by "lots of folks like her," didn't have a positive connotation for me or for K.D.

Figuring if we read this as a negative, others would too, I was hoping for an explanation such as you provided.

These are the perils of e-mail, when you have no means of reading the delivery, as well as the words.

Thanks for the response!