Why I Run: To be Outside. To See what I Otherwise Wouldn't! And because I've Been Running for So Long that Nothing Else makes Sense!

On Sunday, late morning, I was on the way home from spectating at the Nike Women's Marathon in San Francisco. Normally I'd have run that race, but a nagging back injury kept me from participating this year. I am recovering (finally) and can run a 10k, but not ready for a half marathon just yet. Next year I'll be there!
Nonetheless, you can't keep a real "runner" down. While spectating during a race I typically jump in and run a short distance with participating running buddies as they pass by. This year it was so cold, gray and cloudy in San Francisco that I opted to stay bundled up on the sidelines.
On my way home, a half hour south of SF, the sun was out.  Since I was dressed for running, and the day was far nicer in San Mateo than it had been in San Francisco, I stopped off at the Sawyer Camp Trail for a short 4-miler.
This trail borders a huge reservoir, which is absolutely gorgeous, especially during the Fall months. Given the scenery, the time flies by and you are barely aware of the effort it takes to run. It's a favorite trail. From these photos, showing what you see while running, you'll see why. 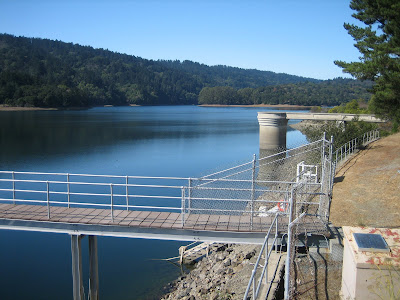 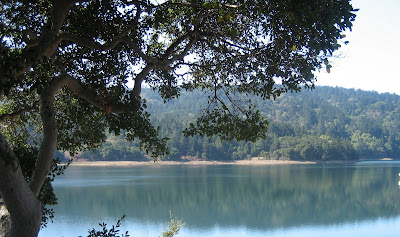 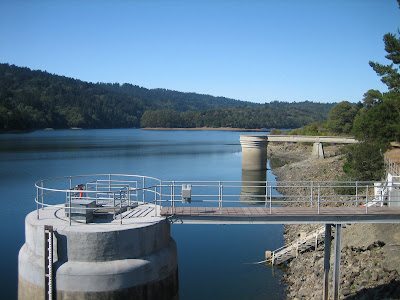 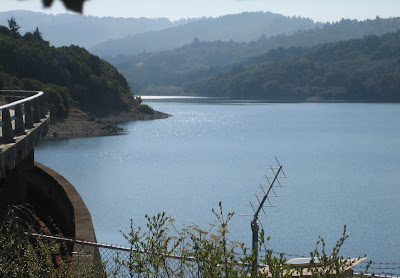 How very lovely! I'm not sure it would prevent me from knowing I was running four miles :>P but it is gorgeous.

Oh Kathy, you're making me miss the bay area.... *sigh* I'm not sure even THAT beauty could get me to run 1 mile... tho if i were in the shape YOU'RE in, it would be a different story! :) Hey, will I be seeing you for the PF Changs marathon in January? (or did I already ask you this and I forgot?)