We're in the Ribbons! 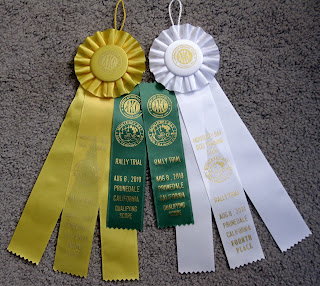 Today it was RAE, leg #7 in Prunedale, CA.  A good day for us, in spite of the rainy, cool weather that started things off this morning. But, like magic, it stopped raining just about the time we were ready for the first walk-through. Then it stayed cool and overcast - which is SO nice for a show. No worries about the sun and heat.

Denali did a great job. She now knows the drill and just goes right to work. When we get to a show, she needs about three minutes of warm up and she's ready to rock! And she's so excited that she, hops right up in the wee hours of the morning to get ready to go. She knows what's happening when she sees me pack the car the night before. What an awesome little dog she is!

We took the third place in the Excellent-B class and fourth place in the Advanced-B class with scores of 93 and 96 respectively. In both cases at least three of those points were handler fumbles - not the dog! I was particularly proud of the fact that we were tied for fourth, but bettered the other team (a sheltie) with our faster time, to snag the placement. That is the first time we've been faster in a situation like that!

Given that the course was completely water-logged and peppered with huge gopher holes/mud piles, I was very happy with her performance. Truthfully, I thought Denali might take off to chase a gopher if she smelled them. She has caught squirrels and is our resident expert vermin hunter. Fortunately the gophers were smart enough to know where they were not wanted and she had no interest in the areas where they'd been digging.

In both classes friends from my dog obedience club also placed (first and second). But for one spot, our Club swept the ribbons! Pretty cool for us!

And... a trainer that we work with, from one of the other local clubs, entered his new Golden Retriever puppy in Rally Novice. This weekend was the dog's debut in the ring. Yesterday he took first place with a score of 99! Today he got third place, with a 97!  He is a happy, bouncy puppy - reminds me a lot of Sage in that way - but in a MUCH bigger body! He thought that yellow ribbon had real "toy" potential! 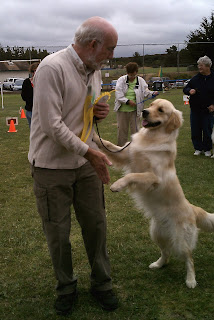 Chalk this one up as a very fun day - in the rain!
Posted by Elbeepem at 7:01 PM

WooHoo! It's always fun to get the ribbons!