In a field of over fifteen dogs, Denali earned herself a second place finish and her second leg in the Advanced Class of today's Rally competition. 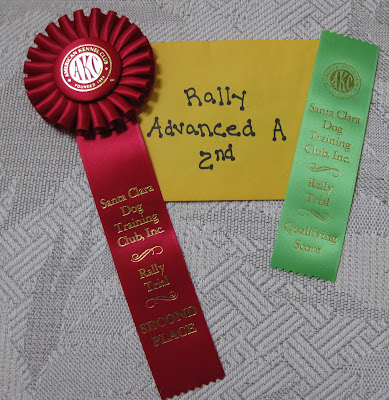 On yesterday's course she was presented with a high jump, with which we've never trained. The solid "wall" took her by surprise, causing her to shy from the jump. Today's course took us back to the familiar bar jump, which is a rock-solid exercise for her. As if to compensate for yesterday, Denali sailed over the jump, landing about eight feet past me, almost to the next sign on the course. I've never seen her jump so far!
As a result I had to scramble a little to get her back into heel position so we could execute the next exercise in the proper place. She came right back and recovered nicely. But that kangaroo-sized jump, and a couple of extra-wide left turns cost us 7 points, to finish with a 93.
Again, her heeling was far better than it has been, so we're figuring out what works...finally! One of my dog training club friends (thanks Elissa) was kind enough to take a photo of us with the judge, Lora, who was excellent - kept things running right on time, and was one of the most pleasant judges I've seen! 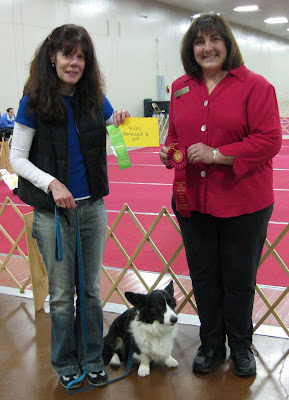 As an added bonus, today's show awarded cash prizes to the top four finishers! So, Denali paid for our parking fee for both days of this weekend's competition!
As an aside: There was also a handsome little brindle Cardi boy, "Charlie," competing in the Advanced B Class. He did beautifully, finishing with a score of 99! I actually had to ask his owner not to trot him past as Denali was showing, as I knew she'd be completely taken with him. So seldom do I see another Cardi. It was great to have a good showing for the breed in Rally today. Nice job Charlie!
But, as so often happens, one of the best moments of the day was not about the competition:
As we were warming up next to the ring, in anticipation of being next, I realized that there was a woman with what was obviously a very nice camera sitting just behind us. I also realized that she was taking photos of Denali as she looked up at me, smiling in response to my praise.
I asked the woman if she had gotten some good shots. She explained that she was practicing with the camera. It was new and she was able to get good photos outside, but indoor shots are always more challenging. She had a friend with her and the two of them were smiling at Denali. Quite emphatically, the camera owner said, "She's got such a beautiful face, and she's so alert. I'll be sure to let you know of I get any good pictures."
I was preoccupied, as we were about to show, but later I realized I hadn't gone back and asked about her pictures. No matter. Her compliment reminded me how special my beautiful girl is. Seeing how pleased Denali was with her performance, and that beautiful face smiling up at me. That's worth more than a million ribbons!
Posted by Elbeepem at 1:15 PM

It sounds like a great day -- Denali may be the only Cardi that has ever paid for the parking! One leg to go.

Congratulations! Good job both of you. I laughed at your description of her shying away from the high jump. Grace did exactly the same thing the first time she saw a jump in rally.