The Bond between Runners 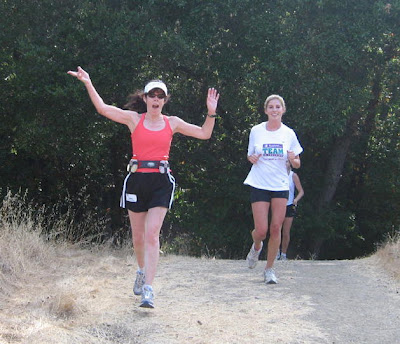 Me (in front) on a 14-mile run in Calero Park
I've been attempting to recover from a fairly serious back injury, piriformis syndrome, for several years now, and am only just finding myself able to run regularly again. I used to run 10-15 miles each weekend without thinking twice about it. I miss that a lot.
I've missed my running friends, the camaraderie, the sense of community between runners. There are just things you talk about with fellow runners that you don't talk about with anyone else. And when you're an endurance runner, going double digit miles on a regular basis, you find that running is a completely different level of experience - you just have to do it to get it.
This evening I was out for a short run. I was in my own space, thinking about how nice it felt to be running and not feeling pain in my back. As I ran down a street, not far from my house, I heard someone say "Hi." It wasn't a strong, robust greeting, but more of a matter-of-fact statement.
I looked up just in time to see an elderly gentleman standing on the front step of the house I was passing. He was easily in his seventies, possibly even eighty. But I didn't really notice his age as much as his apparel. He was wearing a track suit. I had only a moment to catch a quick glance and I was gone, but the Adidas stripes on his pants were unmistakable.
Taken by surprise, I didn't have time to do more than wave and smile. As I sped past his driveway, I heard him call out, "Good job!" Interesting. That's what everyone in my group of running friends always says to one another.
After I passed I got to thinking about our exchange. I wondered about the man. Had he been a marathoner? Was he still? Was he no longer able to run, but just out for a walk? Regardless of his status, he had acknowledged me as a fellow runner. It felt really good.
I'll probably never really know how far he runs, or if he still runs at all. It doesn't really matter, because I know he's still out there on the streets doing his thing.
And like that man, I know another Runner when I see one!
Posted by Elbeepem at 10:52 PM