Sage is a busy little fellow. He's always got a smile on his face and is extremely curious and ready to play. Even while the other two dogs nap, he's often awake, roaming around looking for something to do. So views like this have become more rare, now that he's older. 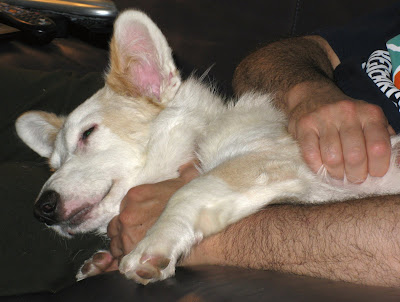 Even when he does nap, any small move from one of us has him up in a moment, ready to investigate. And, as a somewhat velcro guy, he never wants to be too far away. 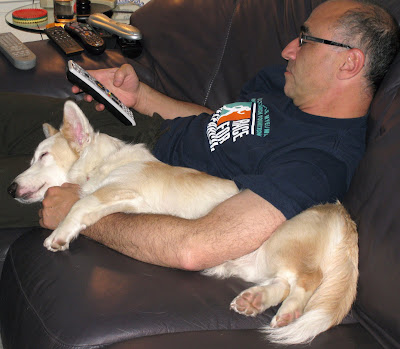 Friday night is usually a relaxing evening for us. With activities on most other nights of the week, this is our night to veg a bit. After a couple of hours of playing with toys, terrorizing his sisters, and getting me to play with him, Sage took the opportunity to curl up with Dad in front of the TV. 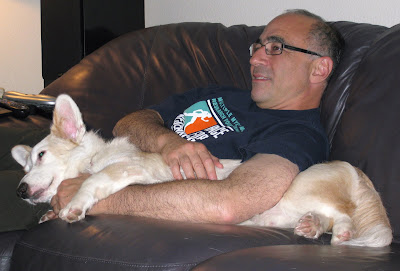 Enjoy the slumber while it lasts. Sage is another one of those dogs that watches TV. When another dog appears, or even just barks, he's all over the TV, trying to find the intruder behind the screen, running to the front door, which is where it must have come in!
A ring of the TV doorbell has a similar effect. He's also interested in some of the dishes shown on Food TV. I guess it depends what they're making that day!
Posted by Elbeepem at 10:52 AM

Well, at least we know what they're going to be when they grow up. Now the only question is whether they will grow up or not. Denali still thinks she is a puppy at age six!

I know that Captain has a show that weekend. We should think about getting the Bay Area Boyz together to celebrate their 1st Birthday!

While in Oregon for the Bandon show Grandma Carolyn said she might come down for the Dixon show. If we can convince her, Megan, and Mandy we can have a BIG birthday party. Let's see what they say.

Oh....that would be SO cool if we could get all the puppy "moms" to come for the Dixon show! Great idea!

Hope all is well.

Hugs to you all.

Way cool! I can't believe these sweet little guys are getting so close to that 1-year mark! Sigh! It will be great to see you and Fig again. Are you going to show him in Dixon?