Denali and I got to go to the vet again today!
After five days of wearing an uncomfortable bandage on her foot the swelling of her dislocated toe had gone down quite a bit. That was the good news.
The bad news is that now that the vet is able to more effectively palpate the toe, he determined that Denali has seriously torn ligaments. This will take awhile to heal and the toe will never be as strong as it once was - unless we put a pin in it...oh geez! Here's the story in pictures! 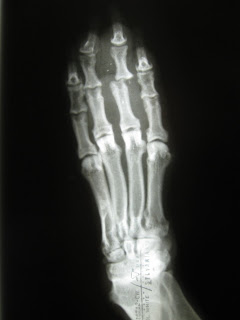 Second x-ray on Friday. Taken after the foot was bandaged and we attempted to relocate the toe. This was the best the vet could do, due to the swelling. 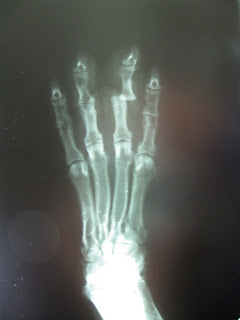 Today's x-ray...ugg.
As soon as the bandage was off and the vet could wiggle the toe, he realized that all the ligaments are torn and there's nothing holding it in position. He said that it will heal, but unless we put a pin in it, it will never be as durable as it once was. He said that if it was his dog he wouldn't pin it. It will heal and be perfectly serviceable as long as she doesn't stress it beyond normal use. The idea of putting her through surgery to have a pin inserted isn't my idea of a good time for her, so I'd rather not go there if we don't have to.

He said, "Well, if this was a performance dog..." Well, my actual thought was to explore agility for her as soon as she was done with her RAE. I guess we won't be going there. Rally isn't an issue, as there are minimal low jumps, so she can continue to do that.

But then, there is the squirrel chasing. I'm not sure how we're going to convince Denali that she isn't supposed to take a flying leap off the deck in pursuit of a squirrel? 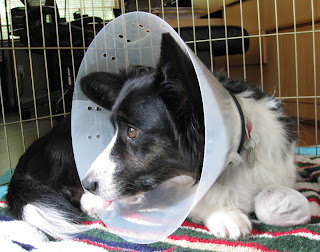 Next Tuesday we go back to have this bandage removed. That is unless she manages to get out of it sooner, as she did on Monday. Obviously she won't be doing the 2-mile walk to support the Canine Cancer Charity on Sunday. I guess it's Elbee's lucky day instead!
To be continued...
Posted by Elbeepem at 12:48 PM

Ohhh, maaan! How do they do this stuff? I hope it heals well without pinning. She can still do regular old obedience, but I'd think herding and agility are out. She can track for sure.

Makes me cry just to look at the x-ray. Ow. Poor baby.

Grandma sends hugs and a kiss to make it all better.

Poor Poor Denali! Hopefully her brother can give her gentle healing kisses during our visit. Poor girl!

Oh no! Poor Denali. :( I hope it heals better than expected!