On Tuesday Denali was supposed to return to the vet to have the bandage on her dislocated toe removed, and an x-ray taken to see if we'd made any progress in relocating it. It was a great plan.
However, being Denali, she managed to remove her bandage (while wearing her E-collar) on Monday at 5:55PM, right after Traci left from a really nice visit with us. Of course she did this because this is the evening when I take Sage to his weekly obedience class. We leave at 6:00PM.
So, instead of putting Sage in the car, suddenly I was frantically driving Denali to the vet, hoping to get in without an appointment before they closed at 6:30PM. We did get in and here's what we found.
Just for comparison we will start with this as a data point: 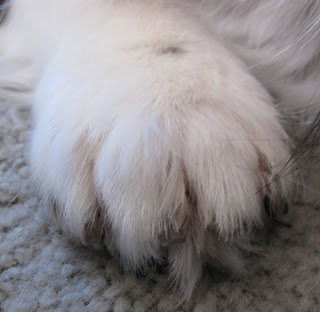 This is a normal front paw, attached to a fluffy Cardigan Welsh Corgi. 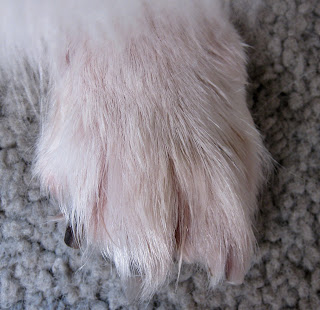 This is the other paw, attached to the same fluffy Cardigan Welsh Corgi.
Notice any difference in the spacing and orientation of the two middle toes? 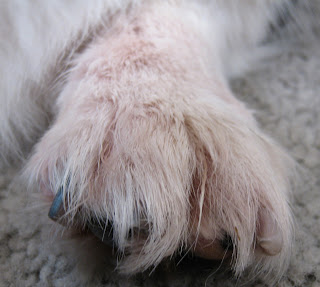 How about now? See the difference? Ouch! 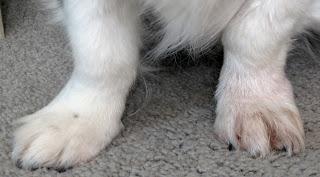 OK, how about now...! Ahhhhh!
Unfortunately, it appears that Denali is destined to go through life with one funky-looking foot from now on. No it won't always be pinkish (stain from her licking at the bandage), but her toes will never be the same. Why...?
Not only did she dislocate the toe, but she torn all of the ligaments. There is nothing holding the toe in place and bandaging it really isn't doing anything to help. If we put a pin in it she would have to wear a bandage, and leave it alone for about 12 weeks. That's just not going to happen with Houdini dog.
So the verdict is that we just let it heal as it will. Right now she is walking reasonably well on it. It isn't causing her pain (oddly enough she has never evidenced much pain and never made a sound when we've manipulated it). She favors it slightly when she walks quickly, but she walks at a normal speed, and runs as if there is nothing at all wrong with her.
Because ligaments take twice as long to heal as bone, we're now officially scratched from the next three Rally Trials (all located conveniently near us, so no long drives...sigh) in which we were already entered through the end of October! She might be able to go to the trial on November 7. We will have to review when the time comes.
The projected healing period is 10-12 weeks! That means she will have to be on a leash whenever she goes outside to prevent her from her usual squirrel hunting running and jumping antics.
In the long run, it will heal, it shouldn't prove to be a problem for her - it will just look funny. But then, she is a Cardigan Welsh Corgi...and they already look a little funny, don't they?
Posted by Elbeepem at 6:21 PM