RE Title at the morning show!
Leg #1 of our RAE in the afternoon!
Congratulations to C-Myste Denali, RE, CGC
Details & Photos below:
Whew...busy week with RE leg 2 in Vallejo on Thursday, followed by B2B trials, morning and afternoon, in Petaluma on Sunday - our first time showing outdoors!
All of the sights, sounds and smells of an outdoor course were a bit distracting for Denali. Although we've been to outdoor matches, it has been awhile and the setup here was unlike anything you could replicate for a variety of reasons.
Nonetheless, Denali got her RE Title at the morning show, placing second in a small Excellent-A class. She didn't have her best round, score 86, and I couldn't figure out why she seemed hesitant and simply refused to do some of the exercises - easy things she knows well. We had to repeat some stations, but got through.
In the afternoon, we made our first attempt at an RAE leg. The course was a good one, nothing she can't do really well. But again, she was hesitant. This time I discovered the reason: It was quite breezy and she was spooked by the wind blowing the colored tape that marked the ring perimeter. Every time we had an exercise near the edge of the ring, she wanted to move away from the tape. Again, we mustered through. She actually did much better overall, but simply refused to do one station that was right at the edge of the ring, costing us an IP. Her score was 88. Without that IP (on something she usually does easily) we'd have been the winners! Oh well, another learning experience.
During the break between the Advanced and the Excellent rounds, I walked Denali around the outside of the ring. I had her walk right next to the colored tape in the corner where she seemed to most uneasy. We stopped and did some sits next to it, for which she was rewarded with a favorite treat. I explained to her that the tape was of no concern and she seemed calmer.
At our final round, the Excellent B competition (our first time in the EX-B group), she was the third dog to show. This time I had "my rally dog" back! When we crossed the Finish line I heard murmurs of "beautiful" and "nice job" coming from those waiting to show next! I knew we'd done well. Sure enough, Denali posted a class-high score of 98, overcoming her fear of the ring tape and settling in to her old groove!
But this was a field of over 20 dogs, many of them beautifully trained in formal obedience. When the dust settled, there were SIX dogs with a score of 98 points! Sadly, we didn't have a fast enough time to place. Against dogs such as the standard poodle, the lab, the German Shepherd, and the Chessie retriever, those little cardi legs weren't quite long enough! But no matter...a winning score is a winning score in my book and I was thrilled with her final performance! 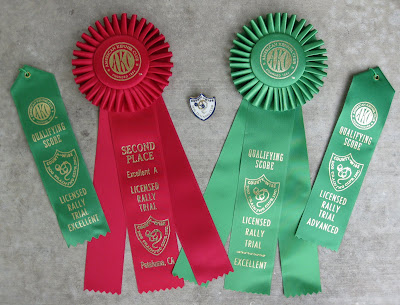 For the day, Denali received her fair share of lovely ribbons. 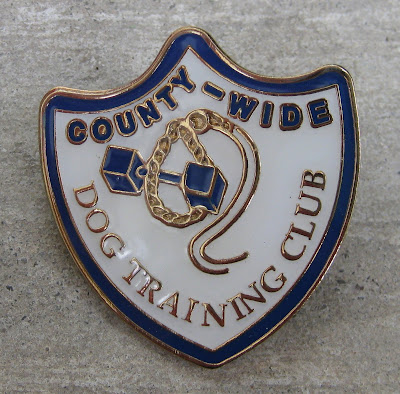 The club that sponsored the morning event also gave medallions for those achieving titles. Very fitting for our RE Title! 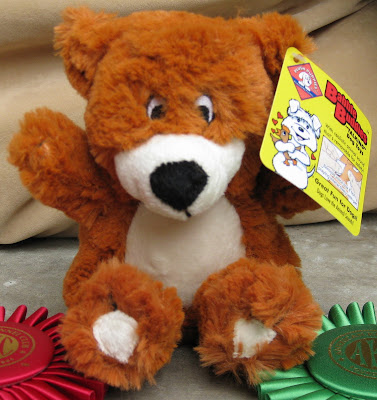 In addition to their showy ribbons, the morning sponsor also awarded toys to the top four. Denali snagged this cute little bear that will definitely catch Sage's attention too! 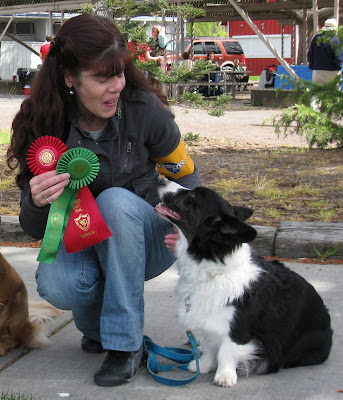 We took some pictures to commemorate our RE Title after the morning show. 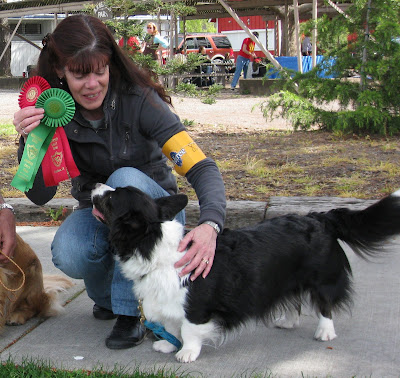 Congratulations Denali - you did an awesome job today!
Posted by Elbeepem at 1:58 PM

Huge congratulations! it sounds liek it was challenging.