More Corgis on a Table!

In a continuing series of How Many Cardigan Welsh Corgis can you Fit on a Table, we captured these shots at the dog show in Vallejo yesterday.
The photographer (me) had a little fun with the group. I never told them when I was going to take the picture and just snapped away while they attempted to "pose" three active "puppies," and two adults who just weren't sure about the whole deal. 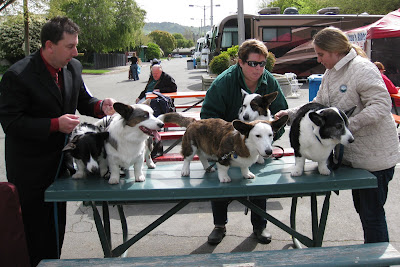 Technically Fig and Cappy are no longer puppies, but they sure act like it! Add Watson's electric personality and you spell trouble in triple digits! Dogs from left: Denali, Captain, Watson, Fig, Duncan. Love Alden's expression in this one! 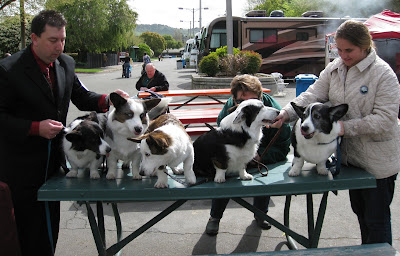 People from left: Trenton, Alden (attempting to hide due to a bad-hair day), and Alden's daughter, Teddy. 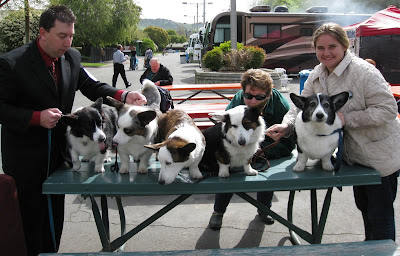 Denali had been up since the wee hours of the morning, and sacrificed breakfast due to her early show time. She thought that the boyz were cute, but was more interested in the food waiting for her in the cooler in the car. Look close and you'll see that she is sticking her tongue out at Cappy. He seems to be curious as to why her tongue doesn't fit in her mouth. (We've all been wondering the same thing since she was a puppy!) 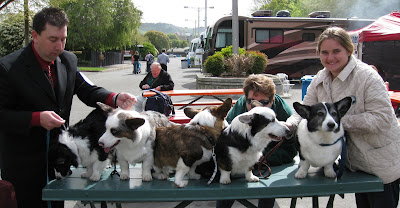 As Alden continues to attempt subterfuge regarding her involvement with this process, Watson thinks it is a game and wants to declare his "win" by finding her in the back row. Meanwhile Denali contemplates the jump to freedom, while Fig and Duncan both see other sights of interest. 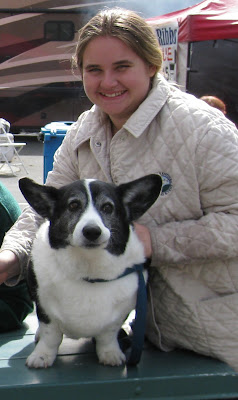 Posing nicely, this little vignette of Teddy with senior citizen, Duncan, was too sweet not to crop and feature.
Posted by Elbeepem at 2:10 PM

I think the person at the next table back is still wondering ... Thanks for all the photos. It's nice to see the kids and their people.

What great pictures! It was so much fun to get the gang together again.

Teddy's using your photo as her new profile pic. on FaceBook. Thank you!

I wish I was only having a bad hair "day." Alas, I'm stuck with this dreadful haircut for months.

Oh nice. I am glad Teddy likes the picture. And your hair doesn't look bad - only in your head!

As far as the people around us...I think they'd pretty much given up on the idea that we'd bring anything but semi-controlled chaos to the party. Oh those corgi people!