After following Kayla's trail, via Google Maps, for the last five days, I am convinced that Kayla is clearly a dog with some "extra lives." She used more than one during this adventure.
She traveled somewhere between 6-8 miles, crossed a major highway multiple times, often in the dark of night. At a point she entered a 400-acre area of dense forest - so dense you'd need a machete to get through. That forest was inhabited by all manner of animals that might have made a nice meal of her, including a female bear, with two cubs!
Only AFTER traveling through the forest, crossing the highway, visiting multiple residences, where she was sighted, but spooked and ran when she saw people, running along the beachfront for about a mile in what appears to have been record time, did she make a wrong turn and enter the Hood Canal Bridge - a HUGE bridge, about half a mile in length, with tons of cars.
Evidently, she had at least twenty cars all stopped on the bridge, before some people got out of their car and managed to catch her. That nice couple then turned around, brought her back across the bridge, then quite a distance, to a local PetCo store. It was about 9-10PM at night when she was found on the bridge.
If you've ever wondered just how far a loose dog can travel, and what sort of terrain they can handle, just check out the satellite images below, showing Kayla's path! 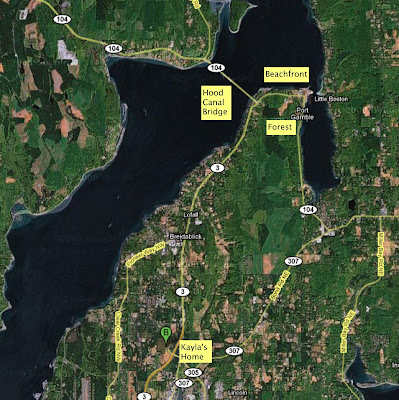 This will orient you to the area. Kayla's home is in Poulsbo, WA. See the "B" marker on the map. She traveled northeast, up through the "Forest," crossing Hwy 104 to the "Beachfront." At that point she doubled back multiple times and was seen numerous times by area residents, who were unable to catch her. This meant she crossed Hwy 104 many times, often at night in the dark! 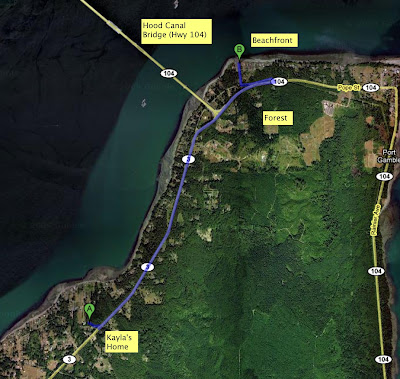 Here's the highway route, showing how far Kayla traveled more graphically. She appeared to have followed the highway path for some distance, before diverging into the forest area. Point "B" is Salisbury Point Park, a park on the beachfront where she was seen last night, not long before she was found. Distance from home to the park is about 2.6 miles. 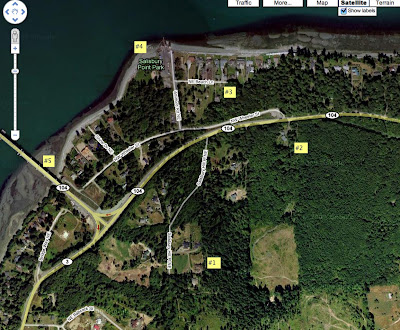 click on image to enlarge
(sorry, due to some bug of Blogger, not all of the photos will enlarge)
This shows Kayla's path of travel, after she traveled about two miles northeast, and was closer to the beachfront. She entered the dense forest, at #1. the end of Salisbury Hill Place. She was seen multiple times by residents on this street. She then traveled deeper into the forest in a counterclockwise direction. 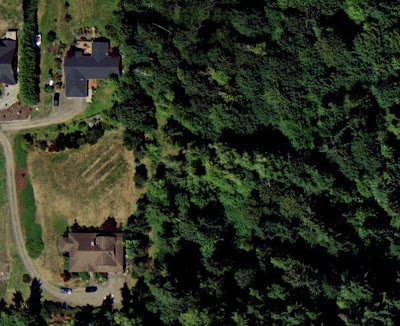 Here is a closer look at the forest, just to the northeast of Salisbury Hill Place. These are the houses you see near the end of the street on the map above. This is where Kayla entered the forest. This huge forest is old logging territory, and is impassable to a person without a machete. One of the search volunteers actually did make an attempt to trek in with one of her dogs, in spite of the fact that they were told there was a cranky mama bear with cubs in the area!
Kayla then moved north, to #2, where she crossed the highway, ending up at the beach. She doubled back across the highway and back into the woods multiple times, then started to head west again along the beachfront.
On Monday and Tuesday she was seen by residents along the beachfront area #3, but none could get close enough to catch her. On Tuesday night she was seen around Salisbury Point Park and area residences #4. She was obviously getting really hungry, as she was coming up on porches by this time. Evidently she ran about a mile along the beach, stopping at the entrance to Hood Canal Bridge #5. 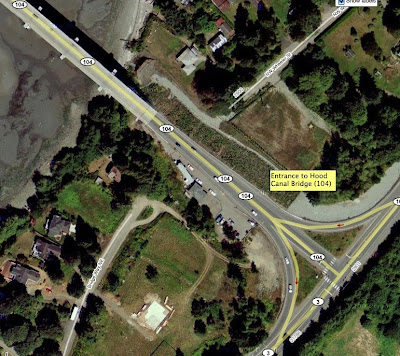 This close up shows the highway entrance to the Hood Canal Bridge. You can see that it is a major highway, always full of cars! We think that Kayla was on the beach and came up the bank and onto the highway.
Clearly the stars were aligned in Kayla's favor, as she managed to literally stop traffic on the bridge long enough for some incredibly kind folks to whisk her into their car. They returned to Kayla's side of the bridge, taking her to a local PetCo store, where the clerks recognized her from the poster that Kayla's mom had left over the past weekend.
Kayla was out for five days. Fortunately there was some rain and she was able to find some sources of water. But much longer and dehydration and lack of food would have started to take its toll. Had she begun to get weak, she'd have been likely to hole up and make a den. Once this happens, the dog moves around a lot less and sightings are unlikely. There must have been at least one guardian angel watching over this girl!
The rescue person in me just has to remind anyone who does not have a dog wearing an identification tag...please put one on. Dogs are still more quickly reunited with their owners by the ID tag than any other means! A microchip is certainly good, and recommended. But a loose dog generally starts to travel at night, and sleep during the day. This means, they're usually spotted in the evening hours when places with scanners are often closed.
Welcome Home Kayla!
We're SO glad you're back!
Posted by Elbeepem at 11:00 AM

what an amazing journey Kayla had... I'm SO very thankful that she is home safe and sound now...

I'm one who never leaves collars on my dogs (but all are microchipped). This really makes me think twice about collars...

Breakaway collars if any - I won't leave them on due to the risk of strangulation, but for pet owners if they have a breakaway section its a good alternative.

What I love about the chips is that they are permanently registered to the buyer (in this case the breeders) so that even if you change the owners if Avid can't find the owner they call us. It's worked in the past more than once.

Yes, definitely breakaway collars - always! I see so many cute buckle collars, but won't do it for just the reasons you mention!

The pattern I've seen shows that a dog is most likely to become separated from its owner during the first few weeks in a new home, or if traveling and not in a known environment. Because it hasn't bonded to the new environment fully, it will often bolt, attempting to find its old home. Even if you don't want to leave a collar on the dog long term, having the dog wear ID for the first month is definitely a good idea.

In this case Kayla might have come directly home when she was picked up on the bridge, versus making a stop at Petco if she'd had ID.

I don't downplay the importance of the microchip for a minute, but feel strongly that there are definitely a lot of instances in which an ID tag results in the dog being returned to the owner more quickly. Both methods are important and my dogs will certainly always have both forms if ID.

In the not-too-distant future, we'll have the technology affordable enough to provide a geographic homing chip for dogs. That sure would simplify things!

I live just a few miles from the bridge. It is THE way to the Olympic peninsula. As was said, that road has a lot of traffic and much of that is log trucks and semis. It is pretty incredible that she came thru this unscathed physically. The biggest lesson I take from this is the fact that no matter how careful WE are, our friends, relatives, employees, may not think about a gate or door ajar. We MUST take the responsibility to see that our beloved fur friends are secure. This scenario has played out far too often; usually with tragic results.
Nancy

So true. In this case the owner had entrusted someone to come mid-day to give her dog a walk. She never imagined that that person would be so careless, even after she'd given him explicit instructions about ensuring that the leash was securely attached at all times.

Sometimes even the best-laid plans...

My goodness....I didn't know about the logging trucks. Most assuredly, the fact that she came home unscathed is a bit of a miracle!