Our little Pembroke Welsh Corgi, Elbee, was never supposed to stay with us. A shy, skittish little rescue dog, she confronted a serious illness and a serious injury, looked Death in the eye and fought back - twice in her first year of life! 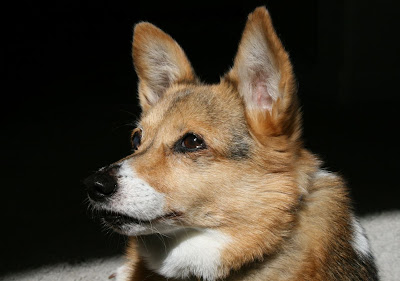 Elbee arrived via airplane on her first birthday. It was a gray, rainy day. She was extraordinarily small, meek, and still weak from a serious case of generalized demodectic mange, and a deep tissue infection under her eye. Later I would find that she had a staph infection, as well as an aerobic bacterial infection in this eye wound, sustained in an attack from another dog. Ultimately, it would require surgery to remove the infected tissue and we'd learn that her tear duct was permanently damaged, resulting in an eye that gets zero lubrication and has required special care for the duration of her life. She's weathered all of this, without complaint, without hesitation. She's nearly lost the eye about three times. Each time, she fights back!
Upon arrival, she weighed just twelve (12) pounds. She was thin, trembling and wouldn't come out of the crate, or even meet my eyes, when I opened the door. Fear was her middle name. She was supposed to go to someone else, but that was before I saw how much rehabilitation she required. When I saw her condition, I knew she wasn't ready/healthy enough for a new home...yet. 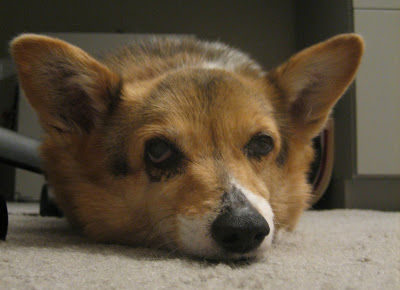 So, she stayed with us. The eye wound was much more serious than it initially appeared. It was deep and took many months to find the right combination of antibiotics to fight the dual infections. Every day I examined the tissue with a magnifying glass, noting the smallest change. The teeniest speck of infection still apparent meant that the drug combination still wasn't right. It was a battle, not only to save the eye, but to keep the infection from traveling down the optic nerve to her brain.
Together we worked - hard - to regain Elbee's health. And in the nine months that it took, we worked on her emotional health too. She learned to trust me, but no one else could pet her for the first three months. She wouldn't approach anyone else for the first six months. The first year of life hadn't been kind to Elbee, on a number of levels. When she came to me, she'd never had "her person." At the end of nine months, she was healthy...and we had a bond that couldn't be broken.
Elbee was called "Roadie" originally. It really didn't fit, but I didn't want to name her, as she wasn't going to be my dog. So I found myself just calling her "little bit" as an affectionate nickname. She never got bigger than 16 pounds, so the name stuck and it is her registered name now. "Little Bit," shortened to L.B. (Elbee). 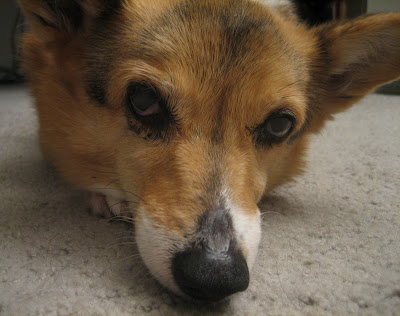 Ultimately, it took three years for Elbee to develop her confidence and become the sweet, social little corgi she was meant to be. Now she is 11 years old. She will be 12 in January. She has always been incredibly sweet, a dog I could take absolutely anywhere. Everyone she meets sees her sweetness, her affectionate, funny little smile.
More than once I've had to keep an eye on her, as I knew someone else would take her home if I didn't watch closely. She has helped numerous young children overcome their fear of dogs with her calm, affectionate approach. But, don't underestimate her just because she's small. This Pembroke Princess has developed every bit of the attitude that we've come to expect of the female corgi. It is "all about me!" 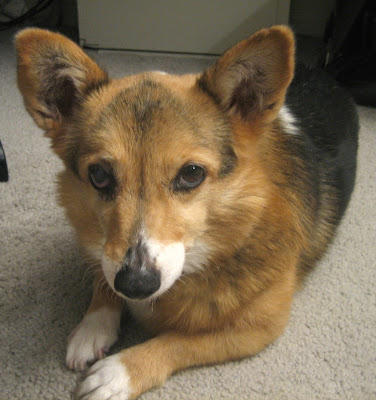 Elbee learned some basic obedience when she was young, but I've never really spent much time training her past that. She has watched carefully while all of the other dogs received their training. Little did I know just how closely she's been watching!
This evening I had Sage registered to take the AKC Canine Good Citizen Test. I knew he wasn't ready to pass, as he is still too exhuberant when meeting new dogs, but thought I'd see how he could do. At the 11th hour, I decided to take Elbee too. She's the best Canine Good Citizen I've ever known!
When we arrived, I saw that this test was set up as stations. This meant that there were multiple dogs on the course at any given time...not a good setup for Sage! In the end, I wasn't able to test him. He just couldn't calm down enough to share the circuit with so many other dogs and not engage them.
But first up, Elbee. Naturally, she'd asked to go first during our ride to the park. I brought her to registration. She immediately smiled, made her cute squeaky noises at everyone and was convinced that our sole purpose was for her to be admired by as many people as possible. She passed through each station, executing all of the CGC requirements with ease. Every examiner remarked as to what a sweet little dog she is. Elbee didn't know she was taking a test, she thought we were just there to visit.
When it came time to do an informal healing exercise, I wondered how it would work. I've never trained Elbee to heal, but she will walk with me. We started out and she walked next to me nicely, not a perfect healing position, but good enough. When it came time to "halt," she stopped, then looked up at me, "Is this the part where I'm supposed to sit?" I nodded slightly and she plunked her little bunny butt down and smiled! OK, I've never taught her that move. But then, I never taught her to communicate with me using her facial expressions, but she does. 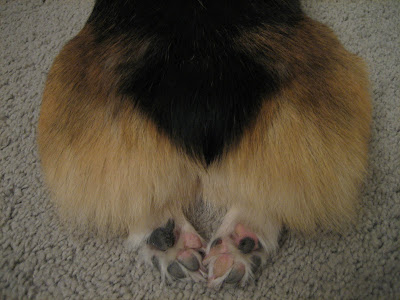 So, from a sticky start, this little 16 pound Pembroke has shown a heart as big as that of a rottweiler, and a personality that is every bit as tenacious. She has never given up. She has always made me smile. And today, she made me very proud!

Here's to you Elbee! Congratulations sweet girl!
You truly exemplify what every Canine Good Citizen should be!
Bridgecreeks Little Bit, CGC
Posted by Elbeepem at 9:12 PM

Congratulations!! What a wonderful story. I am a bit teary now!

Like Jules, I'm a little teary... *hugs* I remember my first meeting with her like it was yesterday - she HAS come a long long way.... she's so lucky to have you! CONGRATS!!

She's special, Kathy -- but so are you. It takes such commitment to work with a rescue that has so many medical and emotional problems. So, I think you are both Good Citizens -- she's the "Canine" and you're the "Partner". Good job!

I'm glad to hear that Fig isn't the only one who got the "overhappy" gene. I read the requirements for CGC, and thought, "There's no way in hell Fig could pass that....yet." We're working on it though.

Hugs to you all,

To be fair to the "overhappy" Sage boy, I did take him to another CGC test last week. It was arranged such that each dog went through the circuit individually. He passed 8 of the 10 tests, failing the meeting with another dog, as I knew he would, and the supervised separation. In hindsight, I didn't instruct him to "down/stay," when I left him, which might have made a difference.

No question, being calm around other dogs is his biggest challenge, but all things considered, I was very happy with his progress. Tomorrow it is back to our CGC/socialization class! The overhappy - it's mostly a good thing!

Please give her a skritch from me.

I have enjoyed reading your blog 4thedogz@blogspot.com and finding out about For Paws Corgi Rescue. As a fellow dog/Corgi lover, I think it's wonderful work you do.

I run a blog called The Daily Corgi (http://thedailycorgi.blogspot.com), at which I feature a profile of a new, reader-submitted Corgi (or Corgi mix) each weekday. It's only a few months old but it's becoming more popular, largely as the result of the companion facebook fan page: http://www.facebook.com/pages/The-Daily-Corgi/104617983090?ref=nf. I'd love to do a feature post about For Paws and your four dogs. Please check out the blog and let me know if you'd be OK with that.

Also, I have started a petition to persuade animal advocate/funny lady Ellen Degeneres to consider adopting a rescue Corgi: http://www.thepetitionsite.com/1/a-corgi-for-ellen. I truly think a Corgi would be a great dog for her (funny/smart/sweet), and more importantly I think she could make a difference by publicizing the issue of breed/overall canine rescue using her world-wide fan base.

Thanks for reading ... Corgi Power To The People!

Thanks for the nice comments. I will check out the Daily Corgi. After over a decade of corgi rescue work, ForPaws Corgi Rescue has a LOT of great stories!

Interesting comment regarding Ellen Degeneres too. Not so long ago we placed a corgi mix with some folks who have a similarly noteable neighbor, Oprah Winfrey...no fooling! Turns out that Oprah has been an incredible champion for rescue dogs. She has done a great deal to support the cause and learned about dog rescue from the folks who adopted our little corgi mix!