Race Day dawns early - our Triathletes ARE READY!
Nissa and I were up at 4:30AM to start our support efforts, and didn't get to bed until 2:30AM the following morning. Nice 22-hour day. We figure we walked about 20 miles over the period of time from the pre-race activities and organization on Saturday afternoon through 1:30AM on Monday morning, when we walked back to the hotel with the athletes.
In many ways it felt as if we were running a marathon, as we also had to be mindful of keeping ourselves hydrated and fed in order to keep our electrolytes in balance. We wore the same clothing we'd have worn had we been participating in a running event ourselves. This is not a spectator sport for the faint of heart!
Months ago, when our friends first signed up for this endeavor, Nissa and I volunteered to be there to "sherpa" and support for our friends. In addition to just being on the course in various places to cheer them as often as we could, it also meant running errands, toting gear, etc. From the Run course we returned to the bike storage area at 6PM in the evening to pull their bikes and move them to the transport area to ensure the bikes returned home safely. Then we returned the bags, containing all of the various clothing and gear they'd used for the swim and biking portions of the event, back to their hotel rooms.
When you know that the bike storage area is about 1.5 miles (one way) away from the rest of the Run course area, you'll realize that we walked about 4 miles, including the side stop at the hotel to drop the gear, just to perform this particular task. Consider, if you're there without friends to do this, you have to go back to the bike area (2 miles away) and do it yourself after completing the event. Personally, I can't imagine how one would do this.
7:00AM - The Start
THIS IS THE IRONMAN TRIATHLON!
Swim 2.4 miles
Bike 112 miles
Run 26.2 miles
Everyone arrives well before dawn to deliver all of the gear they'll need for the day to the starting area. Standing in line with our athletes for the Swim start at 7:00AM, the level of anxiety is intense...understandably. As we waited, the sun rose. 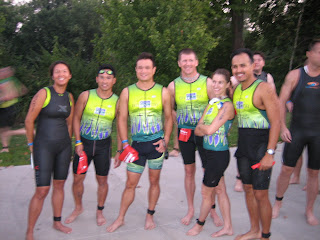 This is the day for which they've trained for 10 months. Now it has come. The South Bay Triathletes, waiting in line to start. From left, Renee, Jerald, Brian, Chris, Trista, Jesus. (Renee, Jerald, Chris and Jesus are my former Run Team buddies.) 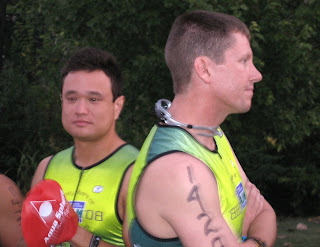 As always, those moments before the start are filled with emotions. Anxiety, fear, excitement...it is a time to calm your nerves and establish your focus. You don't need your friends to talk to you, you just need them to "be there." 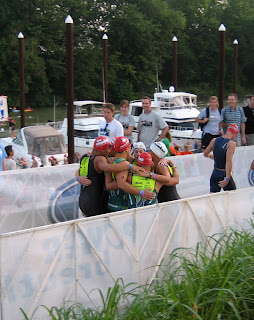 Our athletes enter the starting schute leading to the waters of the vast Ohio River. As they pause for a last Team Huddle, my heart is in my throat. It will be hot today...+90 degrees. (They cancel a marathon if it gets this hot, as the danger of dehydration and heat exhaustion gets too high, not so here.) Silently I wish them all a safe return. These people are first and foremost, Runners. They are not naturally gifted swimmers. I'll feel better when they're out of the water - and so will they! 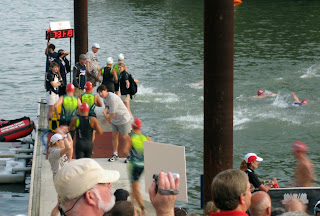 This was a Time Trial start, in which participants jump off the end of a small dock into the water one at a time. A participant is allowed to start every three seconds, there are 2,000 of them. Our athletes are easy to spot, wearing their Iron Team signature jerseys; bright green with purple flames. 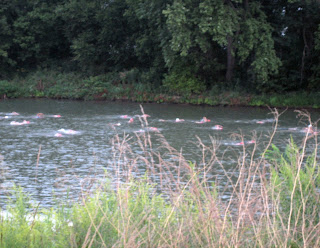 In no time the river is filled with splashing arms - quite an impressive sight! 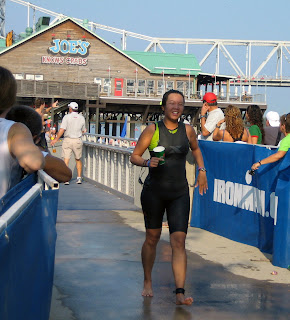 Renee is out of the water. Here she travels down the schute toward the changing area where her bike awaits. In no time she'll be on the road for her 112 miles of riding. Later we'll learn that her cap split during her swim. Suddenly her hair was in her face and she couldn't see. She stopped and grabbed onto one of the kayaks that are in the water to help the athletes if they need assistance. With her hair secured in a band, she continued, finishing the swim in 1:45, just a few minutes longer than anticipated. Sometimes surviving an endurance event is all about how you handle the unexpected. 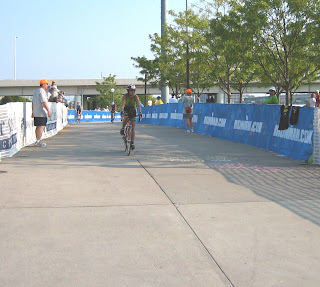 Renee exits the bike schute. Now most of our Iron Team athletes are on the road. Incidentally, the leading professional athlete finished his swim in 51 minutes, but did not go on to win after back spasms took him out during the bike portion. The professional men will finish somewhere between 8-9 hours, while the women will come in between 9-10 hours.
Our athletes are riding out of town and into the countryside of Kentucky on this bike tour. Nissa and I take advantage of their absence to have some breakfast. It was the only meal we would have this day. Thank goodness for those Ironman back packs and energy bars! 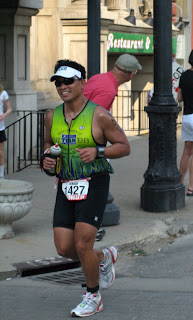 Having finished their 112 mile bike ride, our athletes are in familiar territory - the Marathon Run. Here Jerald approaches mile 2 of 26.2. Experienced marathoners know that there are two "halves" to the Marathon, the first 20 miles and the last 6 miles. It is now about 5:00PM. Our athletes have been up for 12 hours, exercising for 9 hours and it is 92 degrees! This race isn't over by a long shot. 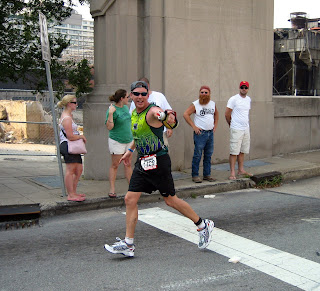 Chris Barber had the textbook perfect race...the day everyone wants to have - everything worked, no major hitches! Still high on the experience, after the swim and bike segments , Chris runs past pointing at us and yelling, "You HAVE to do this! This is Amazing! You HAVE to do this!" That enthusiasm carried him to a first place finish among our South Bay Team! The others each experienced difficulties beyond what they'd hoped, but they regrouped and continued, each in his/her own way. The mantra for the day was "Keep Moving Forward." 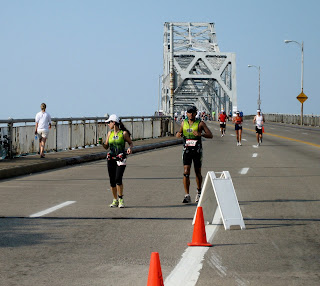 Jesus and Trista approach mile 2, after the run over the bridge to the Kentucky/Indiana state line. 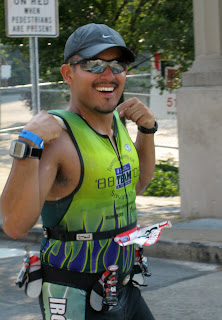 Jesus stops to show us his new cool sponge shoulder pads! On the bridge the athletes were given sponges that had been soaking in ice water...a welcome treat! 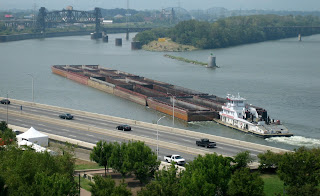 While the Triathlon continues, life goes on as usual on the Ohio River. This shot of a tug boat pushing a series of container barges, was taken from the 11th floor of the Galt House Hotel during a short rest period that Nissa and I took while the athletes were out biking. This two-hour downtime was our only break during the 22-hour period from Sunday to Monday. 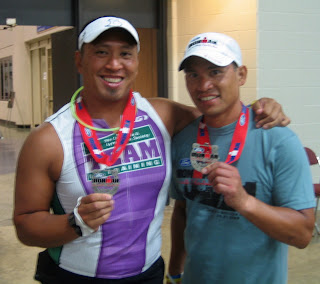 Much later, Jerald and Harold proudly display their Finishers medals! 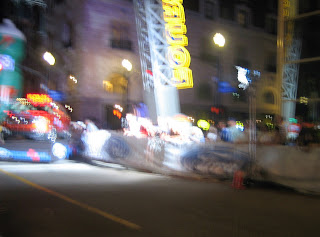 The level of excitement at the Finish Line is unbelievable. Throngs of people are pressed against the finish schute barriers on either side. Because it is now dark outside, and I'd fiddled with my camera settings (Bad idea - never mess with your equipment on Race Day!), my Finish Area photo is really blurry. In hindsight, this is probably pretty close to the way it appears to the athletes as they approach. Ford Motors is the primary sponsor, so there is a car on a big platform to the left, bearing an Ironman logo on its hood.  Everything is lighted, making the effect even more surreal. The cheering and noisemakers go full tilt every time a new participant enters the finish schute to run those last 50 yards. Many run it with their children, or other family members. And many do NOT run by this time!

The Finish is an exhilarating and highly emotional experience for the athletes and the fans. I could not have been more proud of each of my friends in that moment. Chris has not stopped smiling since - it is as if he will burst. Finish time: 13:54:51.

Jerald jokes about the fact that he is a shorter-than-average man at times. As he entered the Finish schute, he was right in front of us. He jumped about three feet in the air and pumped his fist. As he jumped a beam of light illuminated his face. His smile was so wide I thought his face would crack. In that moment, he was 10' tall. Finish time: 14:53:18.

Jesus had a large contingent of family members there. He was completely surrounded and engulfed in hugs. Finish time: 15:41:29

We were expecting to see Renee between 14-15 hours. As the 15-hour mark came and went, we started to become a little anxious. Her boyfriend, Nick, was at the Finish with Nissa and me. Though he didn't say anything, I could see by his face that he was worried. He leaned over the barricades to get a better view of the incoming finishers, still no Renee. By 15:15 he couldn't take it any longer. Turning to me he said, I'm going out on the course to find her. I'll call you. Enthusiastically I nodded and off he went.

Ten minutes later the phone rang. Nick had found Renee at mile 24. She'd had some problems and had to stop and walk some, but was running now and estimated to be about 20 minutes from the Finish. Whew...that was the news were were hoping to hear.

Sure enough, Renee arrived as predicted. I've never been so happy to see someone finish a race. Screaming like banshees we sent her home, racing to meet her when she emerged from the finishers area on the other side of the Line. Finish time: 15:38:22.

How many of us have ever really pushed to that physical edge in which there is no more to give? Relatively few ever will, but these people did. And I will forever be awed and inspired by seeing them do it.

I was astonished, amazed and incredibly proud of my former teammates. They showed a level of determination, commitment and fortitude that is truly rare. Being bluegrass horse country, the medals were shaped like horseshoes...very cool!
Congratulations to all the athletes...the entire South Bay Team finished!
The Ironman Triathlon is an incredible experience. As a participant or a spectator, I highly recommend it. And my friends...Oh yes, they'll do it again because these are IRONMEN AND IRONWOMEN!
Posted by Elbeepem at 10:33 PM

So does this mean you're interested in joining the IronTeam? Hmm? :-) Thanks for the awesome pics, support, and encouragement! Your blog space is awesome! :-) ~ Juice

You guys never give up...this is what it means when you've got IRONMEN as friends....they never stop trying to recruit new players!