This past Sunday we got up early and headed up to San Francisco for the annual MMRF (Multiple Myeloma Research Foundation) 5K walk/run event (3.1 miles).
The race starts on Marina Green and takes us along the bayfront in Chrissy Field - a lovely venue. Generally I do the run and Moe the walk. This year Sage got to be our official canine entry. 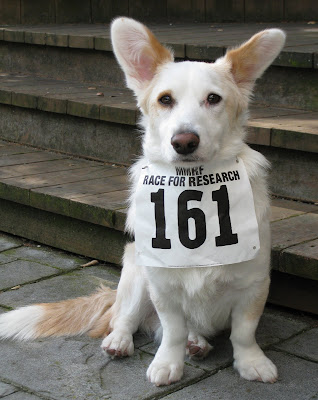 From the time he was a very young puppy Sage been very other-dog reactive; easily over-stimulated by others. Consistent attendance in obedience/rally classes has really helped him learn how to behave around other dogs. This event was a real test, as there were quite a few. He did better than we expected and was a great little corgi ambassador. Growing up has helped too. Can't believe he's already 1.5 years old!
At one point a little girl, age six or so, gave him all kinds of attention. He smiled, gave kisses, rolled on his back and solicited tons of belly rubs. Once again, I was reminded of how wonderful it is to have a dog that spent his first ten weeks with a toddler! He had absolutely no fear or hesitation and she was able to pet him to her heart's content. 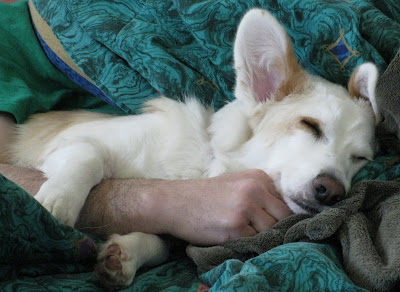 Sage did the 5k easily, acting like it was a walk around the block. But when he got home, it was time for a serious nap. Moe felt the same way so they curled up together.
Posted by Elbeepem at 4:36 PM