Yesterday was a really big day! It started VERY early! Up at 5:30AM and off to Napa, CA for Denali's first-time performance entry in Rally! 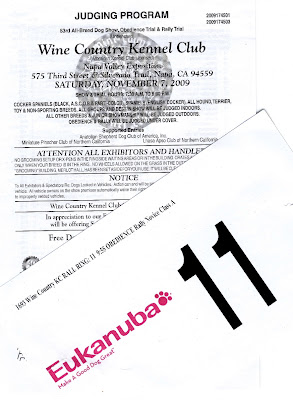 Denali has been training for quite awhile, starting with formal obedience. But from the start it was apparent that the pace of the formal obedience was too slow. As well, this is a very social girl. She is much happier when you interact with her. Not being able to talk to her proved a real detriment.
One of our training classmates suggested we try Rally instead. From the very first lesson, Denali was smiling and happy. I looked down to see her sitting next to me, tail vigorously brushing, awaiting the "heel" command...a different dog! This is the performance experience we'd hoped to achieve! 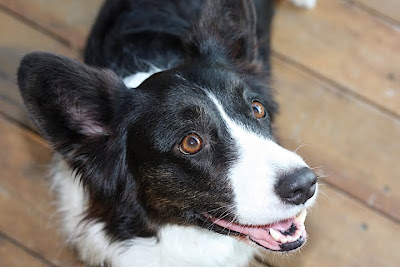 Yesterday morning, Denali was ready to show just how much she's learned! 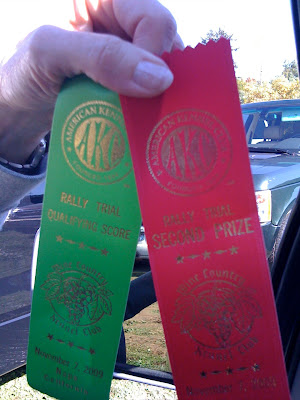 And, did she ever! First time showing, she earned her first leg, snagging a second place finish in an entry of 9 dogs. It would have been a first place finish, with a score of 98, had her handler (me) not made a silly error!
One of the rally stations requires the dog to come forward to the handler and sit three consecutive times. Denali does this perfectly. But on the final sit, I didn't give her enough time to get her butt all the way down before motioning her to finish and move forward. Given her 5-inch legs, and her generously fluffy pants, I had no idea that she wasn't sitting. From the front, she looked to be fully down. But from the judge's side view, she saw that Denali was not quite there. This meant a ten-point deduction for failure to complete all of the principal parts of the exercise. A big deduction! So...lesson learned for the handler - put a little pause in there before moving on!
Special note of huge thanks to Trenton for coming to watch Denali's Rally debut. Your support meant so much and I really appreciate that you made two trips to the show in one day on our account! 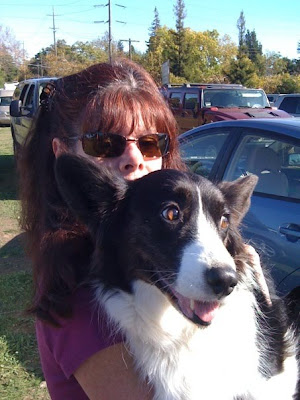 Here's our little qualifier, just after her showing, hanging out with Sage and Elbee, waiting for some friends to show up. 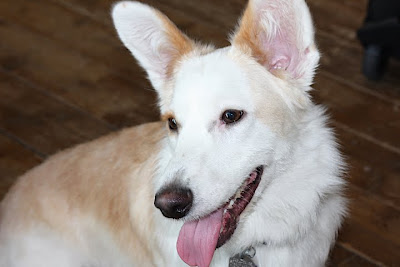 Now for the second part of our day - time to get together with Sage's brothers, Captain and Fig, and their people! Sage was pretty excited to see his brothers. He hasn't seen Cappy and Fig since they were all 10-weeks old. Cappy was showing in conformation at the show too! 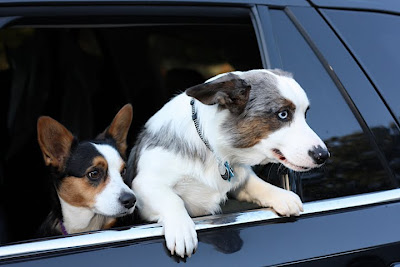 And if you think that Sage was excited, here's Cappy, leaning out the car window upon arriving at the show and seeing Sage! Cappy's "sister," Malibu came along for the party. 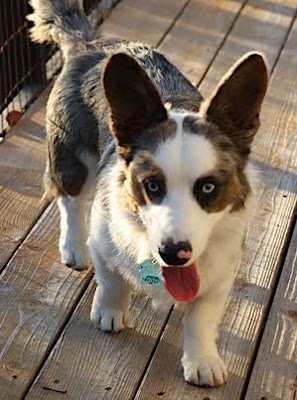 A handsome boy, Cappy and Sage look very much alike - two merle boys in different-colored suits! Their coat quality is the same. If you don't look down, you're not sure who you're petting, just by touch. They can thank Grandma Phoebe for the texture of that beautiful, soft coat! 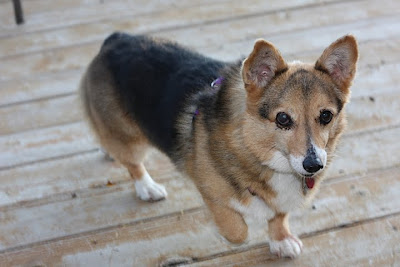 Other party guests included Sage's other sister, Elbee. The teeny Pembroke who played Grand Dame of the group at age 11. 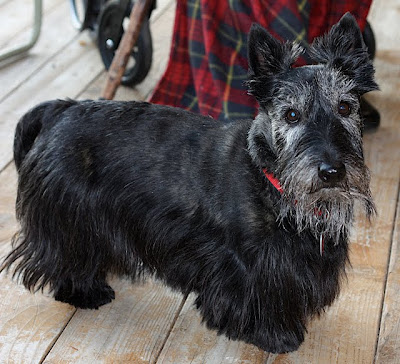 After the dog show, Alden was kind enough to host the Birthday Party at the family ranch in Napa. A most spectacular location up in the beautiful hills, the ranch is home to Alden's parents, as well as their pets.
Onc of their two dogs is this little Scottish Terrier, Tartan. He is about the same size as Elbee and appeared to think she was quite special! This picture of him, next to the plaid blanket at his owner's feet, was too precious for Moe to pass up! 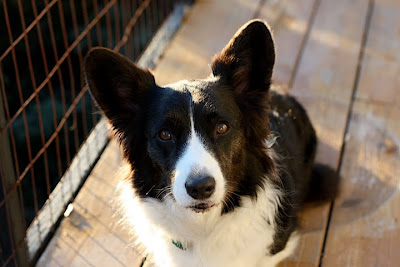 Naturally, Denali was there too. 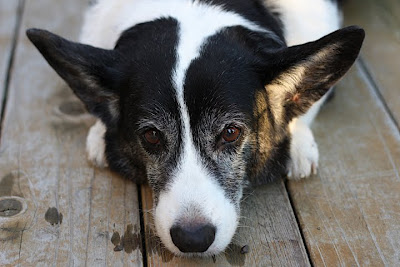 As was Denali's maternal Grandfather, Alden's sweet boy, Dunkey (Duncan). Seeing them together, we don't have to wonder where Denali gets her beautiful face!
We've been related to Alden by dogs for quite a number of years. It was wonderful to see her again, to meet her son, Ian (Fig's Boy), and to see our canine family members together. Officially, the senior member of the group, Duncan is 13 years old now, and just as sweet as I remember! 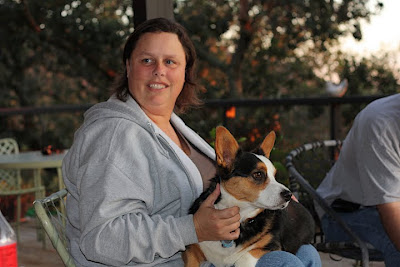 Of course Cappy's human parents were there. Here's Denise with Malibu. Denise took a lot of great pictures of the dogs playing together, so we'll be looking for them on Trenton's blog soon! 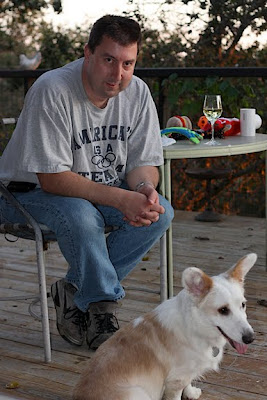 Here's Trenton, with our boy, Sage. If Sage is looking a little tired here, it is because he and Cappy and Fig were running and wrestling non-stop from the time they hit the ground at the ranch. It went on for a good couple of hours and was exhausting just to watch! They had SO much fun together! 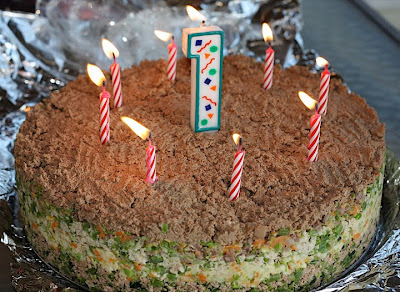 They did find time to pause for Birthday Cake however. To commemorate the first year of these three Tree Litter boys, I made them a Meat Cake! Four layers, beef, chicken, talapia (fish), and chicken gizzards, mixed with a variety of about seven different vegetables, topped with liver crumble "frosting." It was a real hit with all of the canine guests, and there was plenty leftover for an after-party food fest the next day. 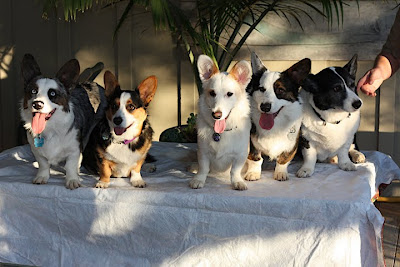 Of course, the humans all had to play party games. This one was How Many Corgis can you Fit on a Table? Several of us took multiple pictures of this little group, so you're likely to see them appearing on other blogs too! From left to right: Captain, Malibu, Sage, Fig and Duncan. 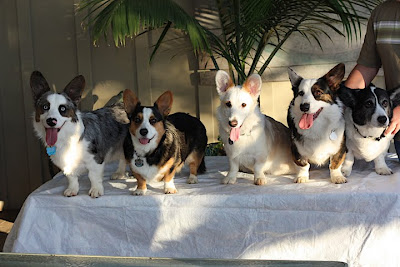 The group shots were great, each one slightly different. 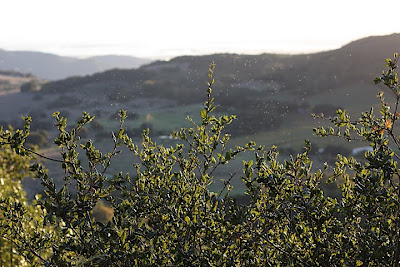 Our party took place on the back balcony/deck of the ranch house. The views looking out over the Napa Valley were absolutely tremendous. The ranch is located on a little slice of Heaven. Thanks again Alden, this was a perfect way to celebrate the many gifts of the day!
NOTE: Moe took the pictures above, as well as a number of others. To see all of his pictures from the day , click here.
And...to see Denise's photos, visit Trenton's blog, click here.
Posted by Elbeepem at 9:46 AM

Congratulations on your Rally debut! My dogs have all loved it -- I think because there is such a sense of relationship.

It looks from the photos like you had a terrific day -- what a beautiful setting for a dognic.

What great pictures, and what a great day! Thank you for all the goodies, and THE cake! It was wonderful to reconnect with you and Moe after all these years.

I ended up going back to the show this morning. Yes, I took dad, and naturaly we missed the Bulldogs. Darn. ;-)I watched a few Rally events, and WOW! what fun. I had Rally confused with agility. Live and learn.

Thank you again for everything. My parents so enjoyed the company, and mom even remembered Sage's name!

It was great to see you too. Oh man...can't believe you missed the bulldogs! I can just hear your mom's comments! :-)

I learned this morning that our Rally class teacher was actually stewarding at the Rally events for the show today. Too bad she wasn't there to see Denali. I know she'd have liked seeing her earn her first leg! We will see her tomorrow evening at our weekly class.

We are entered again in two shows that take place just after Xmas in San Mateo, Dec. 28-29. Let me know if you want to come down!

Way to go Denali! Wow, it looks like it was a fun-filled day.

I'll bet everyone is exhausted now.

Yup, our dogs left the house with us at dawn and we got home around 8PM. Long, but great, day. Dogs slept like rocks, especially Sage!

What awesome pictures!!! Congrats to super duper Denali on her Rally Q! Kota says "Rally's fun, huh?!" :) You've inspired me to get back out there and get the last two legs of Kota's RE... he managed through RN and RA without training, but after (barely) getting our first leg on RE, I realized he needed some more work... ;-) We're so proud of Denali and her mom!!!! :)
SO great to see pictures of Grandpa Dunk!!! I welled up with tears at the sight of him!! :) For the first year of Kota's life he was called Dunkota, cuz Mandy kept saying how much he reminded her of Duncan :) Looks like everyone had a great time!!! Awesome cake, by the way!!!:)

Yes, after the obedience training we've been through, the RN level is a snap for Denali. Her real issue is that she lags on heeling. No matter what I've tried, can't seem to fix that. Accordingly, I am not sure how she will do off leash at the RA, RE levels, but we're going to give it a shot!

Yes, seeing Dunky looking like such a senior gentleman was bittersweet. I remember what a stunning young dog he was. Now he's reached a different chapter in life. He has that sweet face that just melts your heart.

We all had a great time and can't wait for the next go around. Captain loves to have friends at shows. So he will support Denali all he can. I should have pictures up on my blog on Friday.

Congrats to Denali for her big debut! Rallly is awesome and so much fun for dogs and humans alike.

Love the pics from the party! So good to see the boys back together. I love the expression on Captain's face as he is pulling up in the car! LOL...