Carolyn's post, asking whether Hiro looks more like his brother, Captain (Cappy), or his dad, Wally, made me curious. So I stacked them up side-by-side to take a look. Just based on these photos, I am going to say that Hiro is well on his way to being a Cappy look-alike, but Wally's influence is certainly clear in both of them. But then... 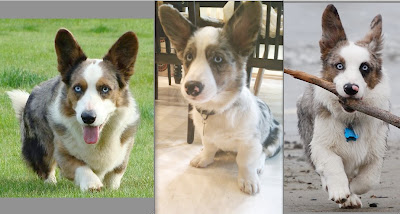 L. to R. - Wally, Hiro, Captain
(click on images to enlarge)
I added Mom to the mix! And guess what, Hiro's white markings certainly show Hannah's influence! All this made me even more interested to see how my own Hannah-Wally puppy, Sage, compared to his handsome parents, so...

L. to R. - Wally, Hiro, Captain, Hannah
Here's the lineup, complete with a picture of the other "pink" puppy in the litter, Sage's sister, Iris. Although it isn't as evident in these photos, due to the different angles, I have always thought that Sage and Iris bore much more of a resemblance than Sage does to his two local brothers, Cappy and Fig. I also thought that Sage's facial structure came from Hannah, not Wally. At the same time, I certainly see Wally's influence! After all, they are a mix of both parents.

L. to. R.- Hannah, Sage, Iris, Sage, Wally
Having a boy with a mostly-white face makes you really look at structure, more than color. Sage is his mother's son. But if you look closely at the coloring to the left of Sage's left eye, you'll see that the shape of his markings echos Wally's markings. Just interesting to see how the parents each influence their young.
Posted by Elbeepem at 12:04 PM

The pink puppies both got Hannah's head, with a bit less heavy muzzle and no roman nose...but the stop, length, topskull etc all come from here.

Otherwise the 2 blue boys are all Wally - other than the markings (which while they mirror hannah is dumb luck) I see very little of her head in them. I do see her more in topline and length though, she's a very large, substantial girl, while Wally is on the small side for a boy (her show weight is 36 lbs, his was more like 34)

That was such a fun post! Its great to know your dogs background. Whiskey was a rescue. I really enjoyed looking at the pictures and analazing them to myself. :-) Again really fun post!!