Sigh...some people!
This really nice boy was owner-surrendered when his owners found him to be "too stubborn" and were "just tired of him." After having him for five years! For this past year it appears they've let him sit in the backyard on his own...and EAT!
The first thing we did was give him a better name. His former name was ill-suited, and frankly, insulting. It was immediately apparent that he was a happy, fun, playful fellow. We thought he needed a name that would express his personality. Now he's "Scooter." From the minute we started using it, he was MUCH more responsive. He's been waiting to be rescued for awhile! 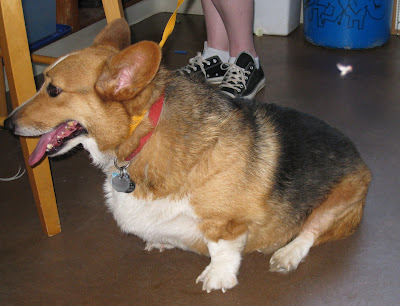 Weighing in at 42+ pounds when I picked him up, he is a good 14-15 pounds overweight. His coat was filthy, skin irritated, nails way too long...a lot of physical neglect going on here. In spite of it he was all smiles, greeting everyone like a long-lost friend. 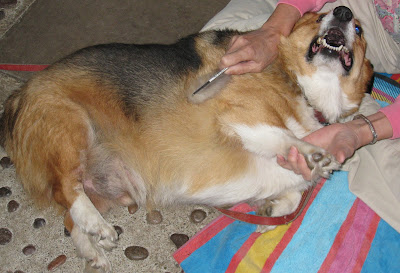 The up-side is that this is just the nicest fellow imaginable. His owners said he was too stubborn...? To the contrary, we're actually finding him to be one of the most compliant, willing-to-please corgis we've had in rescue. It was pretty obvious that he recognized us as "corgi people," with whom he could communicate from the get-go. He couldn't wait to get in the car with me. 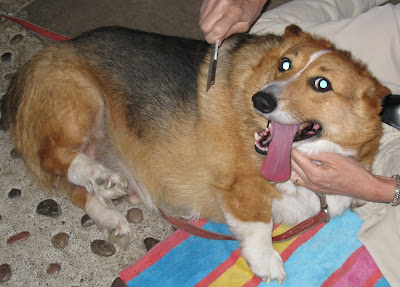 Happy, happy, happy to be rid of all the dead undercoat, unbelievably good about having his long nails trimmed, and simply thrilled by human attention, Scooter is going to clean up nicely. He wasn't so sure about the new diet, including veggies for nutrition and weight loss purposes, but within 24 hours he's with the program. 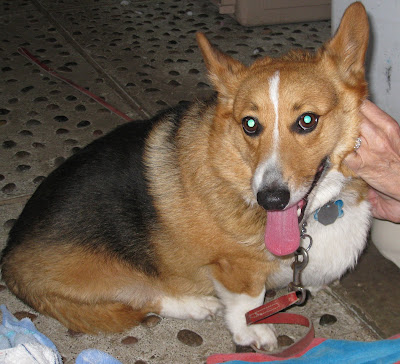 Start with an absolutely beautiful face, plus some downsizing and exercise and we will have a gorgeous dog in no time! Welcome to your new life Scooter. We think you're going to love it! And when we find you just the right new owner, we know they'll be thrilled to have found you!
Posted by Elbeepem at 5:09 PM

Be still my heart! He's such a handsome boy! It's amazing how dogs in such horrible situations can flourish when they find the right people to love them!

That's awful! And infuriating-- It sounds like they are "too stubborn" to adequately care for the pet they chose to adopt. He looks like a sweet, lovable and kudos to you and others who treat animals with respect and care.