This 200+ year-old Coastal Live Oak tree came with our house. Actually, it came well before our house and we had to build around it. The oak is a preservation tree, the only one of its species for a 10-mile span along the bank of the creek bed on which it grows. And it grows right on the other side of our backyard fence. Much of the canopy extends into our back yard, making it a very special place! 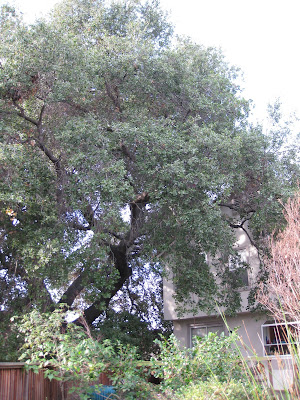 We've lived with this grand tree since 1996 when the house was built. We were instrumental in saving it from destruction when the home builder thought they would just avoid the hassle and cut it down in order to build the house. At the eleventh hour we found out about the plan, notified the water district and the building permit was suspended until an agreement could be reached. Saving the tree cost the builder about $30,000. They had to build a special retaining wall, provide aeriation for the root system, and modify the house foundation structure...all for this tree. Worth every penny! 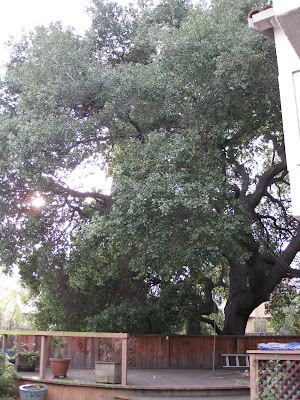 It has grown a lot over the years and it was time once again for a major trim. Technically, the tree belongs to the county water district, as they own the creek bed in which the trunk base officially sits. 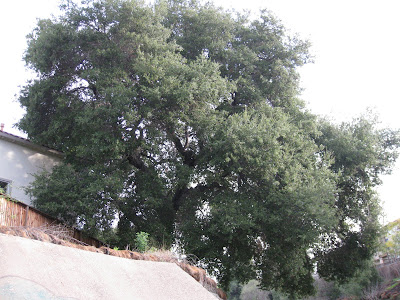 Here is the view from the creek side. I am standing at the bottom of the creek bed looking back toward our house. The house is a two-story and you can see how much taller the tree is. Based on the height of the house, I'd estimate the tree to be about 70 feet tall.
The tree had gotten so big that it was hanging over the top of our house. In the recent rain/wind storms, it was starting to get a little scary, as limbs were scraping the roof. I was definitely glad that the crew finally showed up to do the job.
But not everyone was initially happy about this project!
Compare this well-known diagram below: 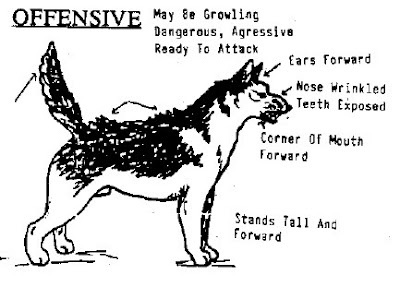 With the postures exhibited by Sage here: 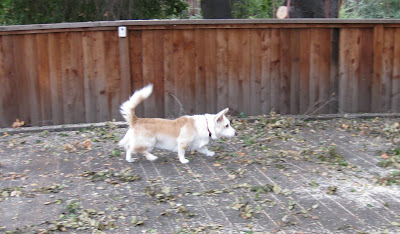 You guessed it - there was something really nasty in our yard and Sage did not like it!
When the crew took a lunch break, I let him out to examine their work. By this time the deck underneath the tree was littered with tons of small branches and debris. Sage immediately went to work tracking all of the workers. He ran around in circles and was quite agitated by the scents of multiple invaders.
And now for the offending item - a tool belt that the workers had left on the deck. That is what he sees in this picture. It was a very foreign object and he was petrified to approach it. Finally he screwed up his courage and bopped the belt with his nose, then quickly backed away. When it didn't move he quickly lost interest and realized that the yard was now full of his favorite toys...sticks! 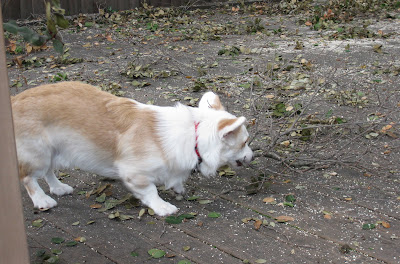 Naturally, he selected one of the biggest branches he could find. It is about twice as long as he is. He tried to pick it up and run off with his prize, but had to be content to drag it instead. Convinced that there would be a lot of competition for something this valuable, he was trying to get it to a far corner of the yard for safe keeping. 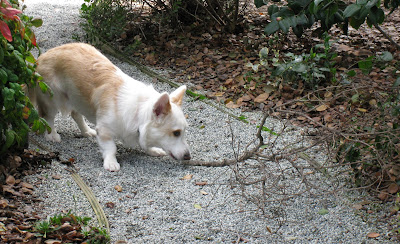 The problem with that plan was that it was so big that it kept getting caught as he tried to drag it down the path in our garden. 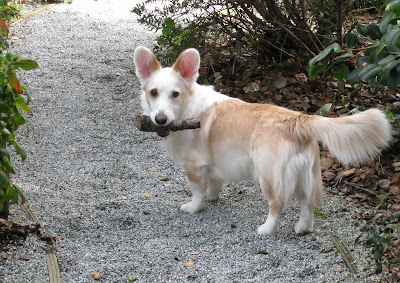 Abandoning the giant branch for a smaller, more portable, bit of tree debris, he is now ready to play keep-away. 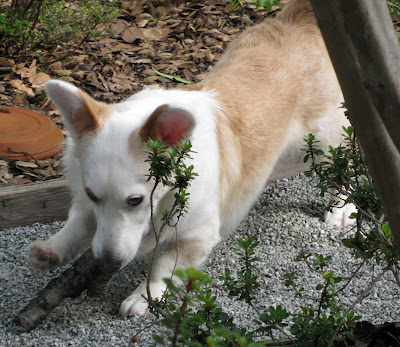 As I watched from the other side of the yard, he stopped and started to jump and play with his new find. Ahh....to be a big puppy and find joy in the simple things!
Posted by Elbeepem at 9:39 PM

At least they left toys.

Funny baby! I love it when they go through the steps from alert to concerned to play.